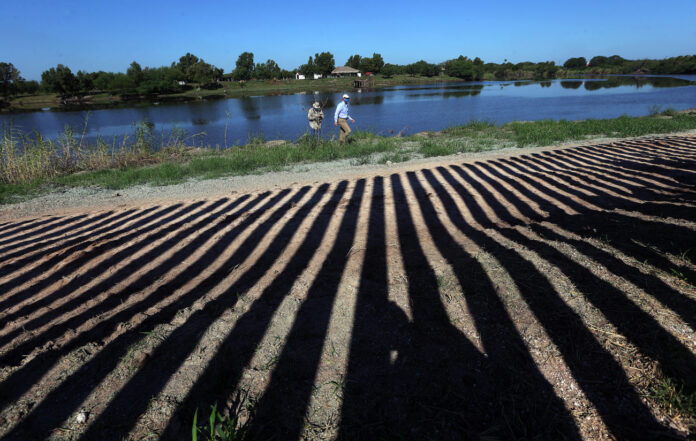 MISSION — It was a pastoral scene. The sound of a bleating goat filled the still summer air as a pair of the animals loped playfully along the gently sloped, verdant banks of the Rio Grande here on Monday morning. Just a few feet away, the rest of the flock was taking refuge beneath the thatch roof of a palapa as the morning grew hotter.

The peace was suddenly broken by the sound of heavy machinery rumbling past on the American side of the river — large yellow tractors trundling past and flattening freshly spread dirt on a riverbank that looked much different than its Mexican counterpart.

Here, the heat rose off white concrete and large swaths of earth lay barren where non-native grass seed had failed to take root after the bank had been stripped of its foliage and artificially graded some six months ago.

In some places, huge chunks of sandy soil have been gouged away from the riverbank, redrawing the once smooth line into a messy mix of jagged angles.

On this side of the river, the scene is much more industrial. For 3 miles, glittering galvanized steel bollards rise high into the air in utilitarian contrast to the softness of the cerulean skies above and the susurrus of the occasional breeze through nearby sugarcane aligned in rows nearly as tidy as the bollard fence.

A bird flushes from the cane and flies over the metal ribbon before dipping low over the water and settling onto a tree branch in an entirely different country.

There’s another sound interrupting the tranquility — the sound of reporters and engineers and surveyors and lawyers, talking. Footsteps tapping on concrete. Repeated warnings to “watch your step” as, in ones and twos, people step toward the water and onto rain-drunk tall grass that obscures the view of the deep gashes carved into the soil both by those same rains, as well as the deceptively calm flow of the river running ever south.

The riverbank is eroding.

For the wall’s builder, Tommy Fisher, a supporter of President Donald Trump who has made a name for himself by advocating for a new way to build border security — securing hundreds of millions in federal border wall contracts throughout the southwest in the process — the eroding riverbank is a test in action.

It’s a way for his crews to know the wall’s weak spots. Where to shore up drainage, where to redouble efforts to seed grass.

For Marianna Treviño Wright, executive director of the National Butterfly Center, caverns carved from the earth that are big enough to crawl into are evidence the wall is a structural failure that could cause collateral damage both upstream and down.

And there’s a third side to the story, too. The federal government itself, which, like the butterfly center, is suing Fisher and his companies.

All three sides were at the private border wall south of Mission Monday for a long-delayed inspection of the structure.

The butterfly center brought with them a cadre of inspectors — a surveyor, structural and geotechnical engineers — people who scrutinized every crack in the mud, measured elevation, conferred with each other as they made their way slowly down the 3-mile stretch.

The U.S. International Boundary and Water Commission, which has concluded Fisher’s wall puts the U.S. in violation of a 1970 international boundary treaty with Mexico, was represented by Assistant U.S. Attorney Eric Paxton Warner, who, like the others, peered into the cracks and crevices along the riverbank.

However, Warner declined to comment on the pending litigation, instead referring inquiries to a Department of Justice spokesperson. Reached by email Monday, that spokesperson said, “I do apologize but we do not have anything else to provide at this time.”

Tommy Fisher, meanwhile, stood loosely flanked by his attorneys and members of his crew as reporters flocked around him for comment on the allegations that his wall is unsound, unsafe, unstable.

He’s scoffed at those allegations before. But on Monday, his tone, while affable as always, was a bit more circumspect. He took on the voice of a teacher, patiently explaining his building methodology and why he’s confident it “will stand the test of time.”

“We’ve built a sidewalk that’s continually reinforced, 8 feet wide, 1 foot thick, 3-and-a-half feet thick in the middle. And we basically have single posts in that,” Fisher said, describing the T-shaped concrete base in which he planted each 5-inch wide square bollard pillar.

The structure had withstood the onslaught of Hurricane Hanna just one week earlier — a Category 1 storm that made landfall near Port Mansfield with 90 mph sustained winds before arcing over Hidalgo County.

Yes, the soil between the wall and the water had eroded — both before and during the storm — but it still performed as designed, Fisher said.

“Based upon his statements, you can tell he lies, because this is not just a little erosion,” she said as she stood about three-fourths of a mile from the wall’s northernmost end.

Just minutes earlier, Treviño Wright had crawled into a cave-like hole where the soil had eroded away from the base of the T-shaped concrete pad — enough so that she could lie completely prone with the slab of concrete over her head like a ceiling.

“He wants to defend his wall, which is literally, I think, indefensible,” she said, not mincing words.

She and Fisher kept careful distance from each other through most of the tour, save for a brief moment at the beginning when the two exchanged barely restrained barbs about erosion and the propensity for concrete to crack.

Treviño Wright was nearly ecstatic to have the crew of engineers inspecting the wall, glad for a chance to finally prove the butterfly center’s case about the wall’s potential to cause harm.

The center’s attorney, Javier Peña, echoed his client’s incredulity at claims the wall is stable.

“They postponed it a couple of times so that they could try to do all this remediation, but it hasn’t worked very well,” Peña said of the long-awaited inspection.

“They’re trying to say that it’s normal, it’s not a big deal, this happens. But, if you look anywhere else along the river — even on the U.S. side — landowners aren’t having to truck in tons of dirt to undo the erosion,” he said.

Indeed, Fisher’s crews have thus far succeeded in laying down only a few hundred yards of dirt to mitigate erosion hotspots. Like the timeline for the inspection itself, their work has been hampered by the weather.

But, as they continue, they won’t just be filling in gaps in the dirt. Nor will they just be shoring up specific erosion trouble spots with “rip-rap” — small stones used to fortify the walls of canals — as Fisher has previously stated.

Instead, on Monday the wall builder unveiled a new plan for the riverbank, one he says came at the request of the U.S. Border Patrol. Once the soil has been regraded and repacked, Fisher’s crews will go about laying down a road of rock stretching 10 feet wide from the edge of the concrete toward the water.

It’ll be made from stones between 1 and 3 inches large.

“It’s big enough that it won’t wash away, but it’s small enough that you can drive on it,” Fisher said.

It’ll help stabilize the bank and will “kill two birds with one stone” when it comes to facilitating better access to border agents who patrol the river.

But, when asked why such a road hadn’t been part of the original build plans, nor had installing access gates at various spots along the wall’s length, Fisher said he assumed border agents would instead patrol the river side of the wall via boat.

Though the basis of the government’s suit against Fisher lies in the violation of the boundary treaty, U.S. Attorney Ryan K. Patrick spoke of that lack of boat access in a Twitter thread lambasting the private border wall last month and calling it “one step beyond vaporware.”

“Next, if a Border Patrol crew on the river has any issues, they have no dry safe haven for nearly three miles! Fisher didn’t put any gates for law enforcement,” the tweet reads.

Fisher insisted gates can be installed at any point along the structure, but that this won’t happen until and unless the government assumes control of the wall.

“Now until they wanna take it over … we can talk to them. But we can put them wherever they want,” he said.

The access gates were just one of the government’s sticking points during the most recent status conference at the McAllen federal courthouse last month. The three sides were slated to reconvene for another status conference this Wednesday, but that has been delayed an additional month, according to an order handed down by the court Monday.

Meanwhile, as Fisher hosted the parties whose lawsuits have forced him to return to the Rio Grande Valley multiple times since December 2019, the construction magnate was about to receive a windfall in the form of another stretch of border wall in the Lone Star State.

Though he declined to speak during the tour about any new or potential border wall projects, U.S. Customs and Border Protection announced on Monday it had awarded Fisher the construction contract for a 17-mile stretch of border wall near Laredo at a cost of $17 million per mile.

The $289.5 million project comes on the heels of a $400 million project awarded to Fisher last fall for a 31-mile stretch of wall near Yuma, Arizona, as well as a $1.3 billion contract for another 42 miles in Arizona.

The Yuma contract is currently under review by the U.S. House Committee on Homeland Security after allegations of irregularities in how the contract was awarded and that the fencing design “reportedly did not meet the operational requirements of U.S. Customs and Border Protection,” according to a letter released by U.S. Rep. Bennie G. Thompson, D-Mississippi, last December.