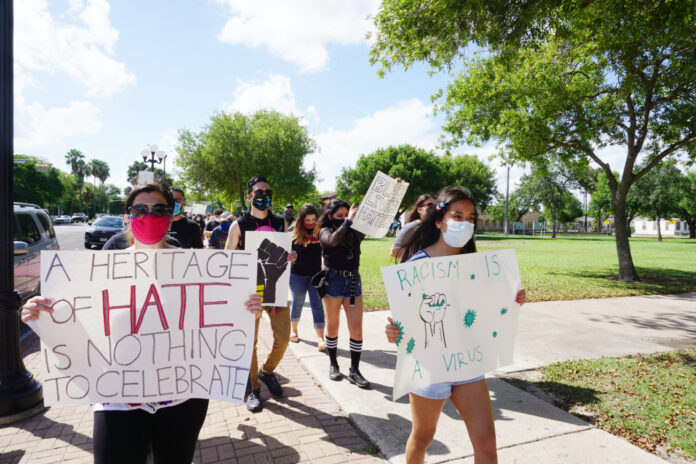 Dozens of mask-wearing community members attended the Brownsville March Against Racism and Symbols of Hate in the downtown area, which celebrated the removal of the Jefferson Davis Memorial as well as informed attendees of the next steps that need to be taken to eradicate racism in the community.

Organizers of the event said the victory, as they call it, of having the memorial removed by the City of Brownsville was achieved thanks to community members who got involved and decided to take action. While they thanked the Brownsville City Commission for unanimously voting to remove it from Washington Park, they said it should not have taken five years to do so after thousands of signatures from residents were raised to have it removed in 2015.

“I want to thank everybody for coming here today and raising your voices against hate and racism, from what is no longer in the park,” Mark Kaswan, co-founder of Frontera Progressives, said. “We can see that raising our voices can and does make a difference.”

Antonio Castillo, one of the organizers and the one who started the petition five years ago to remove the memorial, said their work is not done and he would like to have other symbols of hate in Brownsville removed.

“We still have two other symbols of hate here in Brownsville, one is the Lee building … and the other one is at the Convention and Visitors Bureau, it’s promoting white supremacy and that’s not what this city is,” he said.

“It took us five years here, but hopefully it doesn’t take that long for other causes; this network is reliable, they’re powerful, they’re loud spoken and they take action, they actually succeed at what they do.”

In an interview, Kaswan said the next step would be to work with the Texas Southmost College Board of Trustees to get the Robert E. Lee building renamed and also address some other inequities in the City of Brownsville.

The building was given its name during the civil rights era of the 1960s.

“From my perspective, the next thing is probably working with the TSC Board of Trustees to get the Robert E. Lee building renamed, but also to address some of the other inequities,” he said. “Such as the fact that municipal signage needs to be bilingual and not just in English, but also to look at the Police Department.”

Kaswan said mental health and homelessness need to be addressed by the City of Brownsville with better equipped people.

“Establishing alternative things of dealing with some of the things the police currently deal with, because there are other people who have better training, that are better equipped to deal with those problems and that don’t carry guns,” he said.