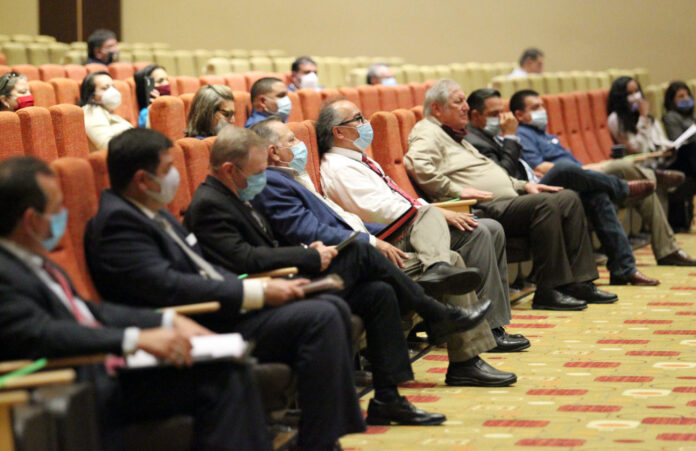 EDINBURG — Hidalgo County and its 22 cities have seven months to spend $151 million in coronavirus relief money, an endeavor like no other that’s proving to be more complicated than anyone seemingly expected.

A large part of the problem comes from a lack of communication, starting from the federal government, which did not attach specific instructions on how exactly the county should share those funds with its cities.

And because there are no legal guidelines, the county voted earlier this month to dedicate a bulk of the money for countywide projects officials believe are necessary.

This didn’t sit well with mayors, who have been showing up in droves to county commissioner court meetings for weeks asking they be funded at $175 per capita — as opposed to the rates the county set at $110 for large cities and $80 for smaller ones.

That, however, doesn’t seem like it’s going to happen based on a discussion held Thursday during an emergency meeting at the Edinburg Conference Center at Renaissance, where local officials finally met as a group to discuss the relief funding that the U.S. Treasury wired directly to the county on April 21.

Hidalgo County Judge Richard F. Cortez began the two-hour meeting by detailing the county’s funding plan, which appears to be contingent on keeping a bulk of the money.

The remaining $67 million was then split into two larger categories: about $50 million were allocated to expand internet services to residents without access, and the remaining $17.5 million would be used for testing, personal protective equipment and proper storage, among other public safety endeavors, the county judge said.

Commissioners asked mayors to consider the countywide needs that could be addressed with those funds, noting deficiencies in the emergency management and public health departments, which, they noted, operate at a countywide level.

Olivarez requested $450,000 from the county “to generate capacity to expand and make sure that we have proper storage of our (future) vaccines and our specimens that we collect,” he said, indicating the University of Texas Rio Grande Valley School of Medicine just received machinery and equipment that will allow it to “handle thousands of tests per day.”

The health department also needs IT infrastructure to comply with federal HIPAA laws in order to allow county epidemiologists to communicate with physicians and hospitals.

“Right now we don’t have the capacity to communicate directly with our hospitals or to the doctors’ offices,” he said, adding it requires “very customized software.”

Additionally, the county is in search of industrial-sized cleaners that disinfect large-square-foot areas at a bacterial and viral level. Those machines would be used to clean the county’s 110 facilities and shared through agreements with other local municipalities, Olivarez said.

All of those needs could cost the county up to $4.1 million, he estimated.

Olivarez also clarified the county is not going to use funds to build a morgue. Instead, an estimated $1.1 million could be used to upgrade it.

“There’s a misconception that we’re building a new facility. That is not the case,” he said. “We are looking at enhancing its current capability to be able to deal with (respiratory) infectious diseases.”

That equipment, however, might not be available in time before the federal government’s end of the year deadline to spend the funds, Olivarez cautioned.

Precinct 4 Commissioner Ellie Torres asked mayors to consider the importance and legacy of those projects.

“I’m sure every city could probably easily liquidate $175 per person, but at the end of the day what are you going to show for it,” she asked rhetorically. “So I ask you today to think about what we can best use this money for that will leave us set for the future.”

“All human beings in Hidalgo County are worth $175. We will not accept anything less than that,” Pharr Mayor Amboriso Hernadnez told commissioners.

Hernandez said the county is likely duplicating services and programs that cities are already trying to carry out because of a lack of communication on the county’s part — a point several mayors made.

“But you don’t know that unless I sit down with you and open dialogue and tell you, ‘You know what? Are you aware that I’m putting a million dollars of my taxpayer money already to assist in these programs?’ No,” Hernandez said. “How would you know if you haven’t sat down with me?”

The Pharr mayor also said the commissioners shouldn’t “short-change” municipalities in order to carry out their projects.

“If you’re removing money that theoretically pertains to Pharr, rewrapping it and handing it back to me, that’s not really help. You’re just repackaging the same money that was supposed to go to me to begin with, and that’s a very hard sell for our population to swallow,” he said. “Again if you want to give me from your pot, we welcome it. Don’t take it from my pot and repackage it and tell me it’s a great piece of pie — it’s not. I wouldn’t call it a great pie. It’s not the same thing.”

McAllen Mayor Jim Darling, who previously agreed to the $110 per capita rate, was more concerned about the process of receiving those funds and the possibility that they will be held up or rejected by the county auditor’s office.

“If that’s the way we’re going to approach it, we’re all heading for a disaster, and I don’t know how we’re going to spend it in front of December,” he said. “We’re already making expenditures now, and I’m on a White House group. We talk weekly. I know what they’re telling me and the Treasury Department’s telling me. But I don’t know what your county auditor is going to do if (she’s) going to be the ultimate person to make that decision… I think we need to have a meeting with (her), and (she) needs to provide some guidance so that we can respond to it in an appropriate manner that way.”

“What Jim Darling said is exactly right. I’ve been doing this job for many, many years and my interaction with the county auditors’ office, with interlocals that everybody has had, is sometimes very difficult,” he said. “Your county auditors, doesn’t matter who’s there, gets to be very picky, and for cities, we’re very concerned that we could incur expenses and then not get reimbursed.”

Edinburg City Manager Ron Garza said there are many models that can be used, the problem is, this type of undertaking is new to everyone in the room.

“I will say this, from a financial standpoint of federal money to the local level user, that’s never ever been done before — not in the Rio Grande Valley,” he said. “None of us have the capacity to independently process what we’re about to do.”

And that might be one of the few things commissioners and mayors agreed on, as commissioners seemed open to the idea of creating a committee of some sort to help iron out those kinks.

They also appear amenable to increasing the per capita rate for small cities in order to bring them up to par with the larger ones.

“Blame me for the $80 (rate) for the small cities,” Precinct 2 Commissioner Eddie Cantu told the mayors Thursday. “I didn’t come up with the idea because I felt that the small cities were incapable (of managing their own programs). I thought that it would be easier for them to join our program. But if the small cities have the ability, we have no problem. We can take this back, we can look at it and we can see how we can budget $110 for the small cities, too.”

Garza cautioned commissioners that their actions are being observed throughout the Valley and beyond.

“I think we have to be very weary of the unintended consequences of this process. We get a very bad rap here in the Rio Grande Valley, and I take that very personally. But we do know what to do when we get resources,” he said, offering another piece of advice. “This could fracture our local governments down here in the Rio Grande Valley for many, many years. That’s the last thing any of us wants, so we have to proceed with a lot of caution.”

Editor’s note: This article has been updated to correct a typographical error.