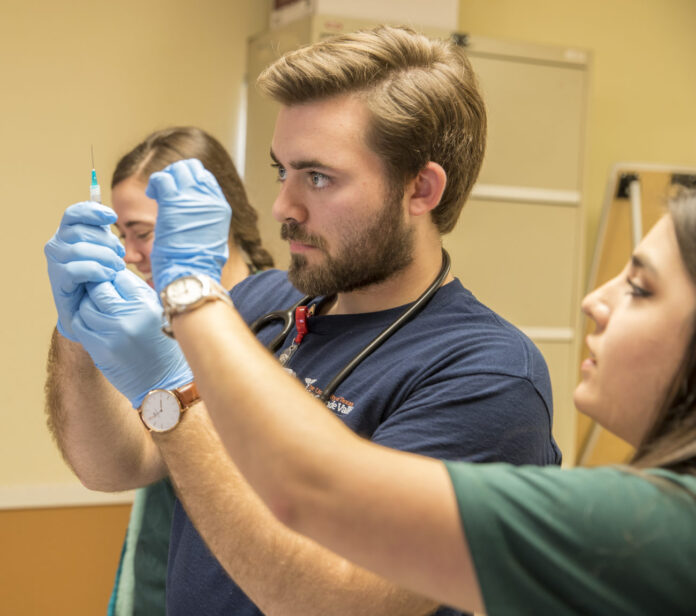 Two members of the inaugural class of graduates at the University of Texas Rio Grande Valley School of Medicine are from Brownsville and plan to return to the city once they complete their residencies.

Dr. Ramiro Tovar will complete his residency at Doctors Hospital Renaissance in Edinburg. A member of the last graduating class at the University of Texas at Brownsville, he delayed applying to medical school to become a member of the inaugural UTRGV Medical School class and complete his medical education among the population he hopes to serve, the people of the Rio Grande Valley.

Dr. Jared Eaves will complete his residency as an Ob/Gyn at Methodist Health System in Dallas. He is a business graduate of the University of Texas at Austin who came back to the Valley during the summers of his third and fourth year to complete his medical rotations. He plans to return to Brownsville after his tour in Dallas, although he is not sure exactly in what setting.

Tovar said he was inspired to become a doctor after a neurosurgeon who happened to be in the hospital in Mexico where his aunt was taken after suffering a burst aneurism saved her life. She had two additional aneurisms that had not burst, and Dr. Gustavo Villarreal, one of only two doctors in Mexico who could have done the surgery, performed the operation pro-bono.

Tovar was then a child, the aunt, who served almost as a second mother to the Tovar children, received 16 years of additional life because of the operation. Tovar said his mother, an accountant in Mexico, also had wanted to pursue a medical education but didn’t get the opportunity after the 9-11 attacks.

“ You see something like that as a kid and you go ‘I want to be like that when I grow up.’ I want to be able to touch people’s lives like that.”

Tovar graduated from UTB in 2015 and was applying to medical school when the agreement to launch the UTRGV medical school was announced. He withdrew his applications and waited a year to be part of the inaugural class, which began studies in 2016.

“ It’s been fantastic,” he said of the experience. He added that he hopes to emulate a quotation attributed to Dr. Sir William Osler, that a good doctor will treat a disease but a great doctor will treat a patient. Tovar will specialize in family practice medicine. “I want to get to know my patients as people,” he said.

Eaves went to Gonzalez Elementary, Garcia Middle School and Lopez High School, then the magnet school for music education. For a time he thought he would pursue music as a career as a saxophone player.

“ I had played with the idea of doing medicine as far back as elementary school, but music really swept me off my feet and I was pretty sure I was going to do music in college,” he said.

“ Toward the end of high school one of my counselors, Mrs. Alicia Roberts, told me about a free summer business camp at UT. … I had always wanted to go to UT and I fell in love with the idea of me going to UT.” He decided that he would major in business and pre-med.

“ During my sophomore or junior year my grandmother was diagnosed with colon cancer. I went with her to her doctor’s appointments and I saw how impactful the medical professionals were. … I loved music but I started to not see it as a career. I majored in business and pre-med at UT Austin.”

During the summers of his undergraduate years, Eaves said he shadowed Valley doctors during medical rotations.

“ My interest gradually grew and during my last year at UT I applied to the UTRGV medical school. … On match day I matched into Ob/Gyn at Methodist Dallas. My plan now is to come back to Brownsville in some capacity as an Ob/Gyn.”

Dr. Kenneth Shine, the keynote speaker at Saturday’s commencement, said the ceremony will celebrate the accomplishments of the UTRGV School of Medicine’s inaugural class.

“ As they take the next step in their medical careers, it is our honor to take part in this historic event. This commencement officially sends off our first class of medical students, and they will proudly carry the UTRGV name across the country as they enter residency training. This ceremony represents the success of the School of Medicine, and includes the faculty, administration, students and community who have dedicated so much to this program.”

For the virtual ceremony, students will log onto a designated Commencement 2020 webpage starting at 10 a.m. Saturday. They will hear messages from UTRGV leadership and special speakers and will hear their names called to virtually receive their degrees. The link is open to the public and anyone interested in watching the ceremony will be able to access it online at UTRGV.edu/SOMGrad .