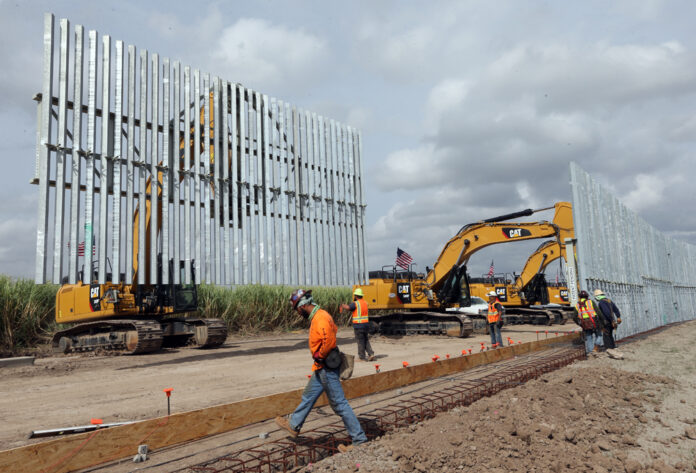 Using new data, the federal government has determined that a stretch of private border wall construction south of Mission violates an international boundary treaty between the United States and Mexico, but that certain mitigation measures could rectify the issue.

The government’s new conclusions came to light Wednesday morning during a joint pretrial conference held in federal court among the parties of two separate lawsuits — the first filed by the U.S. Attorney’s Office in December on behalf of the International Boundary and Water Commission, and the second filed by the National Butterfly Center and its executive director, Marianna Treviño Wright.

Both lawsuits name as defendants the private wall builders, Fisher Industries, TGR Construction and their parent company, Fisher Sand & Gravel Co., as well as property owners, Neuhaus & Sons. Additionally, the NBC names the non-profit fundraising organization, We Build The Wall, along with its president, Brian Kolfage as codefendants in its suit.

The lawsuits have dragged on — first, as delays mounted regarding the completion of predictive modeling needed to determine if the structure would impact the Rio Grande in violation of the 1970 treaty with Mexico, and then as concerns over COVID-19 disrupted courthouse activity.

In response to a request from the IBWC last fall, Fisher Industries conducted some predictive modeling; however, by January, the IBWC had itself been unable to complete the modeling or replicate Fisher’s results.

An expert witness for the NBC testified that the modeling left out critical variables and was deeply flawed.

The modeling is meant to predict what would happen to the river in a Hurricane Beulah-like flood event. Will the course of the river be changed? Will the water level rise beyond safe limits?

Any changes to the river have the potential to impact the international boundary between the countries, which — from El Paso to Brownsville — is delineated by the centerline of the river’s path. As a result, both nations maintain a joint responsibility via the IBWC to oversee and approve development along the waterway.

As the court delays continued, the government proceeded to explore the wall’s potential impacts on the river, conducting new modeling using methods the IBWC had requested Fisher use in its calculations.

The results? The now-constructed 3-mile wall does violate the international boundary treaty, but not as severely as previously thought, and in a way that Fisher may be able to mitigate.

“We ended up running our own modeling using quite a bit of information from Fisher, but also adding in the other information that we thought it needed,” Assistant U.S. Attorney Eric Paxton Warner explained during the hearing.

“We then obtained results that, actually, we believe are better results than the Fisher model,” he said.

The government notified Fisher Industries of its findings via a four-page letter from the IBWC that was delivered on April 23 — along with a hard drive containing the voluminous data from which those conclusions were derived.

“From our analyses, we noted that the constructed bollard fence is not in compliance with the 1970 Boundary Treaty,” reads the letter, dated April 20. “Specifically, we identified one location where the percent deflection was 10.32%, well in excess of the threshold limit of +5%.”

The findings contrast with Fisher’s own results, which predicted four “deflection points” above the 5% threshold, Warner said.

“I’m not sure we’re agreeing with their modeling,” said Mark Courtois, an attorney representing the three Fisher co-defendants. “But, we are agreeing that this is probably an engineering issue,” he said.

“They’ve raised one deflection point that they want mitigated. I don’t know that we agree with that,” Courtois said, adding he was hopeful that Fisher’s and the government’s engineers could “come together to try to work that out.”

But, it’s not just the potential for flood damage or changes in the river’s path that concerns the government. The four-page letter also outlines concerns about debris accumulation, long term maintenance of vegetation growth, as well as maintenance and repair of any potential erosion of the riverbank.

In the letter, the IBWC asks Fisher Industries to address those concerns and submit for review its mitigation plan for the section of wall the data shows will exacerbate deflection.

“(A)ny observed erosion should be repaired by the proponent in a timely manner. Failure to do this along with continued erosion can impact the location of the international boundary line,” the letter reads.

In court, Courtois mentioned the need to add gates to the structure to facilitate access for Border Patrol, adding that “we don’t have any agreement on where those should be at the moment.”

But for attorney Javier Peña, who is representing the butterfly center in its separate lawsuit against the wall builders, the need to add access gates is in itself an admission of a fact the Fisher defendants have previously tried to refute: that the structure would have substantial, treaty-violating impact on the Rio Grande.

“Fisher for sure said that there’s no obstruction; it wasn’t going to collect debris,” Peña said via phone Wednesday afternoon.

“You can’t say that it’s not gonna cause obstruction and then say, ‘Well, we’re gonna put gates in to mitigate the obstruction that’s caused by this wall,” Peña said.

Peña asked the court to instruct Fisher to share the government’s data with him so the butterfly center’s own expert witness, engineering geomorphologist Mark Tompkins, can take a look at it himself.

During testimony earlier this year, Tompkins said his own modeling indicates the wall, which follows a U-shaped path along the river, could cause significant deflection at the bottom of its curve. It’s the same area of concern revealed in the government’s findings Wednesday.

“The letter itself does kind of back up what our expert’s fears were, that, you know, this is potentially a huge hazard,” Peña said, reiterating his hopes to receive the data soon so it can be analyzed by Tompkins.

However, if the issues can be mitigated, it may affect whether or not the butterfly center’s suit continues forward. Crane raised the possibility of the BNC nonsuiting its claims should the data be verified, and Peña did not rule out the possibility.

“(If) our expert confirms the data and there is no increase in harm to the neighboring properties, you know, facts are facts. And we’re not gonna litigate a case just to litigate it,” Peña said. “We’re litigating this case to prevent harm to our property,” he said.

Federal prosecutors, too, indicated the government’s suit may not require a trial should a suitable compromise be reached. The government has forwarded its new findings to the IBWC’s Mexican counterparts and is just awaiting their comment.

“They are the wildcard because they will run the model and analyze it themselves,” Warner said, before adding that Mexico has raised few concerns in other border wall construction.

In the end, Crane reset both cases for an additional 60 days.