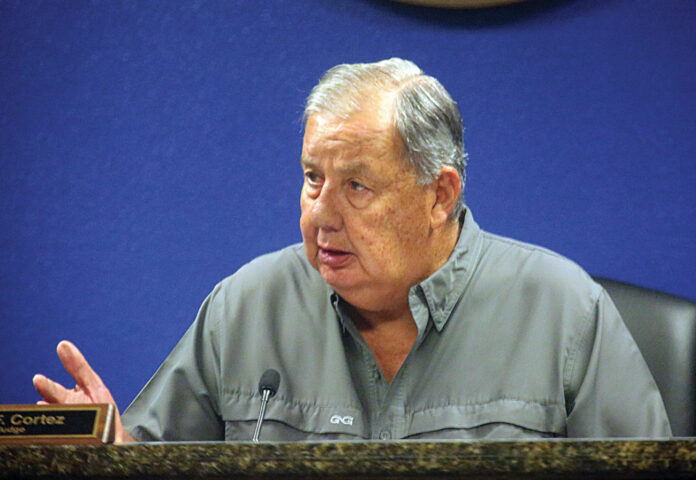 EDINBURG — Hidalgo County Judge Richard F. Cortez is urging residents to remain cautious as the county and state continues a phased process of reopening the economy, adding that financial help is coming for small businesses that have been affected by the pandemic.

Cortez made the plea for continued vigilance, social distancing and heightened hygiene practices during a video conference with local media Wednesday that was simultaneously broadcast on Facebook Live. It’s that vigilance and the social, economic and emotional sacrifices that have allowed the county to succeed in its fight against the virus, Cortez said.

“As a community, we are facing truly challenging times. Our lives have been dramatically altered by an enemy we cannot see,” Cortez said at the top of his address before taking questions from reporters. “We are surrounded by a danger that threatens the elderly, the sick and the compromised,” he said.

In the eight weeks since the county judge issued a series of executive orders that shuttered nonessential businesses, closed churches and parks, required residents to wear facial coverings, and restricted movement via a curfew, the number of positive cases here has seen a demonstrable decline.

Midway through the pandemic — during week 4 — the county saw its highest number of COVID-19 cases at 70. Each week since then, the numbers have fallen: from 63, to 42, to 36 last week. Cortez was optimistic that this week’s tally would be lower still.

“To date, we have succeeded in slowing the spread of this virus,” he said.

“I’m so proud of you. Many of you in Hidalgo County rose to the occasion,” he added a moment later.

On Tuesday, the county reported its first day with zero new cases since reporting began in mid-March. On Wednesday, six more people were confirmed positive, while one previously confirmed person was newly released from isolation.

But Cortez implored residents to continue taking precautions as the economy begins the slow process of reopening, calling his executive orders “an extraordinary action in confronting an extraordinary challenge.”

That challenge has resulted in scores of businesses closing their doors, including some of the county’s largest retail centers, such as La Plaza Mall and the Mercedes Premium Outlets. The abrupt economic slowdown has also threatened to put many small businesses out of business, even as federal lawmakers approved billions of dollars in economic relief via the CARES Act and the Paycheck Protection Plan

However, obtaining that economic aid has not been easy. The coffers ran dry less than two weeks after the first CARES Act bill was passed, leaving many small businesses in the cold. It’s something Cortez hopes to help rectify as the county itself receives federal aid dollars.

“I will be asking the commissioners’ court to appropriate as much of the funds that are eligible from the corona relief funds, monies, to go towards grants to qualified small businesses and individuals in Hidalgo County,” Cortez said.

The county judge hopes as much as $38 million will be available for small business grants, though the county has yet to determine how the funds will be disbursed, nor who will be eligible. The grants will be awarded according to federal requirements, he said.