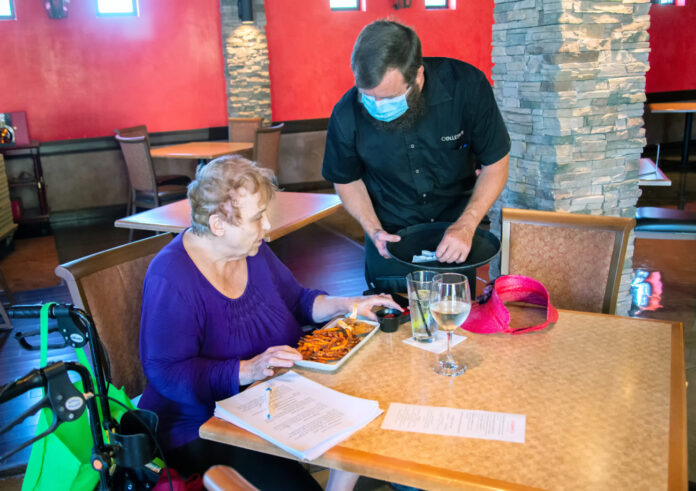 “The people here in Harlingen have always been very loyal to the store,” Munivez, assistant manager at El Pato Mexican Food, said Friday as his customers filled every open table about a month after Abbott shut down the state’s businesses to prevent the spread of the coronavirus.

Outside, cars packed the restaurant’s parking lot as a long line led to its drive-thru window.

“We’re limited in seating capacity right now,” Munivez said as customers lined up behind the counter to place their orders at about 11:30 p.m. Friday.

Across town, at least 47 businesses stopped operating, leaving more than 382 workers unemployed, according to a survey conducted by the city’s Economic Development Corporation.

But through the month-long business shutdown, El Pato’s drive-thru and carry-out sales helped the restaurant keep all its employees on the payroll.

“In spite of all that’s happened, we didn’t let go of anyone,” Munivez said. “One of the things that helped was we never shut down. We pretty much stayed at our normal numbers as far as drive-thru and take-out.”

Outside, Mandy Aguilar was sitting in her car, taking orders from family members as children filled her back seat.

“I feel everything’s going to come back,” Aguilar, an office worker, said as she thought of the economic crisis stemming from federal guidelines and state and local orders limiting gathering sizes to prevent the virus’ spread. “It’s good for people who have to make money.”

But like many residents, she feared the COVID-19 virus despite Cameron County’s falling number of new cases.

“I wouldn’t want to go to stores and take my children inside yet,” she said. “It’s just the numbers of the population that’s still sick.”

However, Treviño said he’s recommending residents continue to wear facial coverings to protect themselves and others from the virus.

“I know they say it’s optional,” Meade said. “We think it’s safer for now for our employees and people.”

For the first time in about a month, customers were walking into his shop.

Outside, traffic steadily flowed along the city’s streets after a month of shelter-in-place orders mandating residents without justifiable excuses stay home to prevent the virus’ spread.

The city was coming back to life, Meade said.

As customers walked into his shop, a clerk pumped sanitizing gel into their hands.

Under rows of fancy cowboy boots, he pointed to a pair of boots a customer had tried on.

“If it’s been tried on, we put it to the side for a couple of days before we put it back in stock,” he said.

The safety measures, he said, help make some customers more comfortable about entering the shop.

“It makes them feel a little better to come in to the shop,” he said. “We’re trying to do it right.”

Down the street, Joe Ayala said he wasn’t ready to reopen his popular Pepe’s Mexican Restaurant.

Serving customers at 25-percent dining capacity, he said, wasn’t worth it.

“For 22 people, it doesn’t make sense,” Manager Mike Herrera said, referring to the number of customers he’d serve at 25-percent seating capacity. “We would have more staff than clients. We’re full-service so we’d have our waiters, dishwashers and busboys, too.”

Under the first phase of Abbott’s plan to jump-start the state’s economy, businesses are required to follow a series of steps aimed at preventing the virus’ spread.

“There are all the stipulations — sanitizing, cleaning, checking temperatures of staff,” Herrera said, referring to the state’s plan, which requires restaurants to check employees for virus symptoms.

Now, Ayala’s considering reopening May 18, when Abbott rolls out the second phase of his plan, which will allow businesses to reopen at 50-percent capacity.

“Maybe in about two weeks,” Herrera said. “We’ll play it by ear.”

At Valle Vista Mall, Portillo Jewelers was one of the few shops reopening.

“I expected people to be coming out. It’s just getting back into the rhythm of things,” April Compean said from behind the long, glass case. “But it feels a little strange. There aren’t as many people as I thought. I don’t think people are ready for it.”

At Toy Express, owner Zafar Broola said he was closing his shop until more customers returned to the mall.

“It looks like it’s too early,” he said of Abbott’s decision to begin reopening the state’s businesses.

Then Broola pulled out his cell phone to check on the virus’ death toll.

“These are the United State’s numbers,” he said. “They should keep it closed until the cases have gone down. Safety has to be the first thing.”