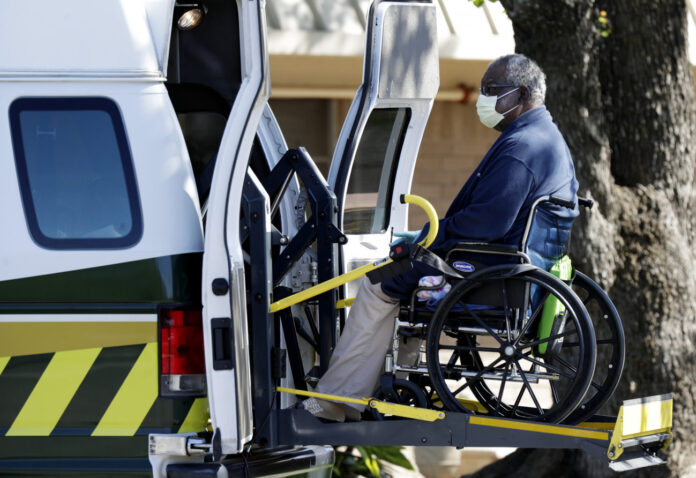 AUSTIN, Texas (AP) — Coronavirus outbreaks at two Texas nursing homes have infected more than 140 residents, and Gov. Greg Abbott said Friday that Texas has doubled its number of available hospital beds in the past two weeks. But hospital officials say not enough protective gear is available for doctors and nurses, and Texas isn’t getting all the supplies it has requested from the federal government.

Here’s the latest from Texas:

More than half of the 146 residents and staff members of a Galveston County nursing home have tested positive for the novel coronavirus, prompting county health officials to quarantine the facility.

In a statement Friday, the Galveston County Health District said 83 residents and staff members at The Resort at Texas City tested positive Thursday for COVID-19, the illness caused by the novel coronavirus.

District officials became aware of the first positive case at the home on March 28. “Over the weekend and early this week, an increase in positive COVID-19 cases was reported. The health district felt it prudent to test all residents and employees for the virus,” according to the statement.

Some results are still pending.

For most people, the coronavirus causes mild or moderate symptoms, such as fever and cough. But for others, especially older adults and people with health problems, it can cause pneumonia. The World Health Organization said this week that 95% of the deaths in Europe were of people over 60.

Nursing homes across the U.S. have been in lockdown for weeks under federal orders to protect their frail, elderly residents from the virus. But a wave of deadly outbreaks nearly every day since suggests that the measures including a ban on visits and daily health screenings of staffers either came too late or were not rigorous enough.

Texas has more than 5,300 cases and at least 90 related deaths, according to state health officials.

At least eight staff members have tested positive at the Southeast Nursing and Rehabilitation Center, which has one of the biggest outbreaks at any nursing home in the U.S.

One resident who had COVID-19, the disease caused by the virus, has died. Of the 84 residents at the nursing home, 67 have tested positive, and the mayor said they were scrambling to locate and test more than 50 other staff members who worked at the facility.

“If San Antonio needed a wake-up call about the seriousness of COVID-19 to our community, this is it,” Nirenberg told reporters.

Abbott said Friday that Texas has about 20,000 hospital beds, nearly double what the state had in mid-March after relaxing occupancy rules. He said hospitals around Houston and Dallas, where there are the most cases in Texas, have about one-third of their beds available.

Abbott said Texas is “ahead of the curve” in hospital capacity, but even groups working with his office said personal protective equipment shortages remain an issue. “We simply don’t have the PPE we need to protect staff,” said Carrie Williams, a spokeswoman for the Texas Hospital Association.

Texas hasn’t received any ventilators from the national stockpile, and although the state received 3.8 million masks from the federal government, a “much larger number” was requested, said Nim Kidd, chief of the Texas Department of Emergency Management. He and Abbott steered clear of criticizing the amount of supplies coming from Washington but acknowledged the private sector was taking on a bigger role.

A state district judge in Houston has halted the release of inmates from the county jail, which had been ordered to prevent the spread of the coronavirus in the facility.

Harris County Judge Lina Hidalgo, the county’s top administrator, had signed an order that would have prevented individuals facing non-violent charges from being held at the jail during the county’s disaster declaration due to the virus.

Judge Herb Ritchie on Friday voided Hidalgo’s order, saying only members of the judiciary have the jurisdiction to order the release of county jail inmates.

Up to 1,000 inmates could have been released. Officials say there have been three confirmed cases COVID-19 among inmates at the jail with 33 others showing symptoms. The jail has about 7,800 inmates.