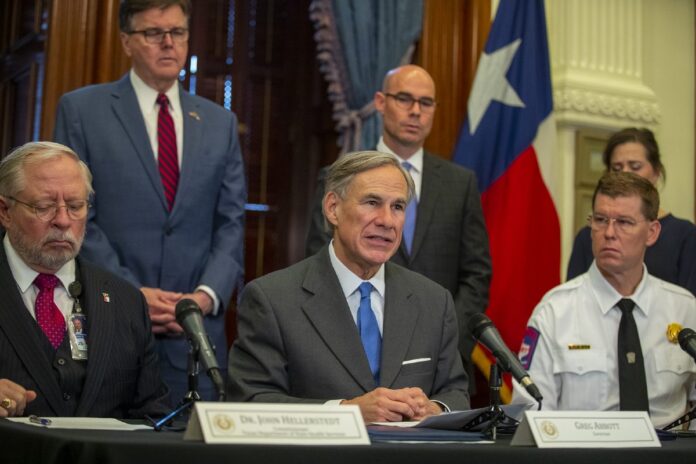 Gov. Greg Abbott took multiple measures Sunday designed to expand hospital staffing and capacity in Texas, but declined to issue a statewide shelter-in-place order — even as calls for such an action increased as the new coronavirus continued to spread across the state.

In an effort to free up hospital beds in anticipation of an influx of patients sick with COVID-19, the disease caused by the coronavirus, Abbott ordered health care professionals to postpone “all surgeries that are not medically necessary” and suspended regulations to allow hospitals to treat more than one patient in a room.

But he did not order all Texans to shelter in place, noting that there are still many counties in the state without confirmed cases and that he wants to see the full impact of an executive order he issued Thursday.

In the meantime, he welcomed local officials to take more restrictive action than he has statewide. Within two hours, Dallas County was the first local jurisdiction to do so by ordering all residents to stay at home if they were not doing certain essential activities.

During an afternoon news conference at the state Capitol in Austin, Abbott also announced the formation of a “strike force” to respond to the coronavirus and that the Texas National Guard, which he activated several days ago, would be deployed this week to help hospitals deal with the outbreak.

In the lead-up to Abbott’s news conference, though, attention centered most intensely on whether he would go beyond the executive order that he issued Thursday. That order urged all Texans to limit public gatherings to 10 people, prohibited eating in at restaurants and bars and temporarily closed schools. That order went into effect midnight Friday and goes through midnight April 3.

“We need to see the level of effectiveness of the executive order,” Abbott said. “What we may be right for places like the large urban areas may not be right at this particular point of time for the more than 200 counties that have zero cases of COVID-19.”

Officials in some of the hardest-hit parts of the state had been calling for Abbott to make the move. A group of North Texas officials, including the mayors of Dallas and Fort Worth, sent Abbott a letter Saturday asking him to “consider mandatory shelter-in-place orders” statewide. The officials were joined by several health care executives.

“We must do all that we can now to protect our patients, our healthcare professionals, and our first responders so we can save lives and restore the economic vibrancy of our cities and our great state as quickly as possible,” the letter said.

The CEO of the Dallas-Fort Worth Hospital Council made a similar plea Sunday morning. In an email soliciting support from other community organizations, Stephen Love wrote that the health care executives that make up the council unanimously agreed on the need for an immediate shelter-in-place order to tamp down an anticipated surge in patients.

While acknowledging “all models we have reviewed have limitations, input inconsistencies and different assumptions,” Love included in his email a graph projecting that the state could run out of hospital bed capacity in late April if further action isn’t taken. The source of the graph was unclear.

And minutes before Abbott’s news conference, U.S. Rep. Vicente Gonzalez, D-McAllen, called on the governor to issue a statewide shelter-in-place order. The congressman said in a statement that Texas is “one of the most vulnerable states and it is past time for state leadership to take serious steps to curb the spread of COVID-19.”

Abbott said that his decision not to issue a statewide order should not stop local officials from issuing such orders in their jurisdictions.

“Local officials have the authority to implement more strict standards than I as governor have implemented in the state of Texas, “Abbott said. “If they choose to do so I would applaud them for doing so, but at this time it is not the appropriate approach to mandate that same strict standard across every area of the state, especially at a time when we are yet to see the results coming out of my most recent executive order.”

Dallas County’s order, which was issued by County Judge Clay Jenkins, still allows for people to leave their homes for outdoor walks and to purchase necessary items like groceries. Businesses are also expected to close their doors, unless they provide essential functions. It will remain in effect until at least April 3.

Abbott said he was mostly “seeing good, aggressive compliance” with his previous order. But he emphasized he expects “full compliance” and listed penalties for failing to do so: fines up to $1,000, potential jail time of 180 days and mandatory quarantine orders.

Abbott added he would continue to monitor the spread of the virus across the state.

“I will always remain flexible and on a moments notice be ready to take whatever strategies on a statewide level to make sure we are doing all that we can” to fight the spread of COVID-19, he said.

As for the strike force he announced Sunday, Abbott said it will focus on finding supplies to deal with the virus. Its members include Keith Miears, senior vice president of worldwide procurement at Dell; John Zerwas, a physician and former state representative who now works for the University of Texas System; and Clint Harp, vice president of transmission strategic services for the Lower Colorado River Authority.

Abbott also said he was naming Elaine Mendoza, who chairs the Texas A&M University System of Board of Regents, to address daycare needs for health care workers.

As of noon Sunday, there were at least 355 confirmed cases of COVID-19 in Texas and six reported deaths. Abbott noted that the state’s tally only included cases that had been confirmed by the Centers for Disease Control, however. He said Sunday that 566 people in Texas have received presumptive positive or confirmed tests. At least 8,756 people have been tested.