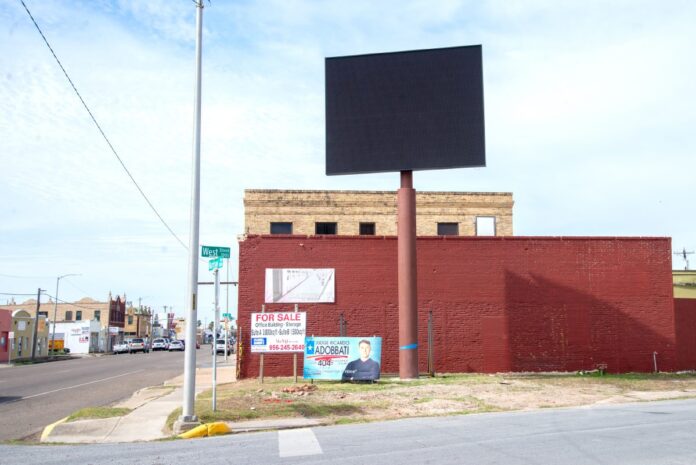 HARLINGEN — After waiting for the city’s approval for two months, attorney Ruben Peña has lit up one of the downtown area’s biggest electronic signs.

Across the street, Denise Sluck wants a sign, too, to advertise her gym on West Harrison Avenue.

But about a block away, Sharon Doucet thinks Peña’s 35-foot sign hovering over rows of old two-story brick buildings looks out of place.

Meanwhile, Peña says he’s unclear about the city’s restrictions on advertising on the $100,000 sign he believes “will pay for itself.”

Last year, a city official mistakenly granted Peña a permit for the sign that was too big to comply with the Downtown Improvement District’s strict regulations.

At the time, the official didn’t know Pena’s office building at 222 W. Harrison stood at the edge of the so-called “overlay” boundary that extends the Improvement District’s regulations to the La Placita area, City Manager Dan Serna told commissioners earlier this month.

At first, officials mulled removing West Harrison and Jackson Avenues, from the railroad tracks to F Street, from the overlay’s protective boundaries just to let Peña put up his sign.

Then earlier this month, commissioners passed the first reading of an amendment to the ordinance that would allow bigger signage such as Peña’s sign along West Harrison Avenue because it’s designated as a state highway.