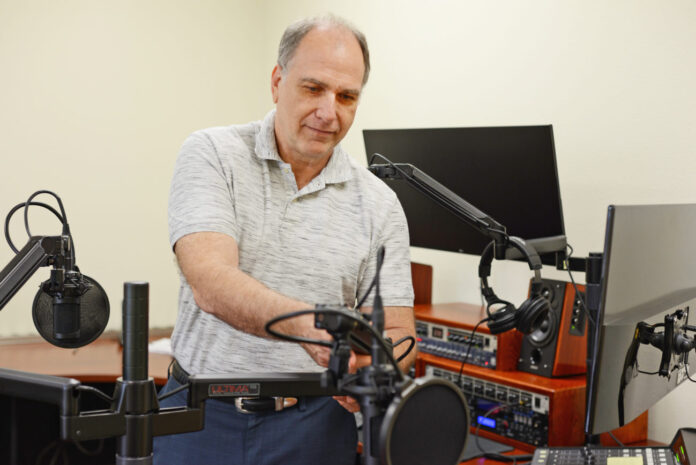 The man is gone but his playlist lives on, 24 hours a day, seven days a week, and you never know what you’re going to hear next.

The nonprofit station began broadcasting July 12, 2017, from the Lone Star National Bank on Boca Chica Boulevard. “LP” stands for “low power.” Ramirez submitted an application to the Federal Communications Commission to create the station after the Local Community Radio Act was signed into law by Barack Obama in 2011, freeing up the airwaves to small-time operators by repealing restrictions on the lower FM spectrum Congress had enacted 10 years earlier under pressure from commercial broadcasters.

The FCC approved the application in 2014. Ramirez convinced Lone Star to let him put an antenna on the roof, and the bank agreed to make studio and office space available. Ramirez had plans for a DJ, curated programming, local weather, community news, local performances, live spots and all the rest.

In the meantime, to avoid dead air, he downloaded a few hundred of his favorite tunes — from the Gipsy Kings to the Rolling Stones and everything in between — and pressed “shuffle.”

There it remains today. Although the BSPA board and its new president, Michael Quantz, Ramirez’s longtime friend, are in the process of taking KXIQ to the next level in line with Ramirez’s original vision, the station for now remains an uncurated musical grab bag.

Sure, Tito Puente followed by Jimi Hendrix — or Merle Haggard or Amy Winehouse or Dean Martin or the Shirelles — is a bit disorienting, but that’s KXIQ.

“Market research says that people want predictability in broadcasts, but there is an element in this that’s surprising,” Quantz said. “People kind of like not knowing what’s going to come next.”

While not totally abandoning the free-for-all vibe, changes are coming, including programming divided by musical genre. Quantz said one of the first curated shows will be a blues program hosted by Chris Maley, former programming director for Public Radio FM 88, which went off the air last May after being sold by the Catholic Diocese of Brownsville.

But programming is the easy part. Making KXIQ station self-sustaining while fulfilling its role as a real community radio station is harder and costly, and BSPA volunteers are beating the bushes for underwriters.

“We’re working with individual sponsors and developing underwriting with entities of the city, because it’s a community-based, non-commercial educational cultural and arts radio station,” Quantz said.

KXIQ has a sister station, KVIQ, which will carry out the same mission but in Spanish, he said.

“As far as we’ve been able to find out, and we’ve asked radio people about this too, this is unique in the country, so we’re planning on doing content that is broadcast in Spanish and English,” Quantz said.

An early focus is the 2020 Census. KXIQ recently recorded its first PSA to disseminate information on the census and why it’s important for every resident to be counted. The spots will be broadcast in English and Spanish, he said.

The first produced show will be called “Brownsville Matters,” entailing interviews with the mayor and other of the city’s leaders and influencers, Quantz said.

“That’s going to be our first set,” he said. “That will also provide an avenue for spin-offs like ‘Health Matters in Brownsville’ and local programming that is oriented to news and information, emergency broadcasts, and just material that’s of importance to people in the community.”

“We’re going to pool all our folks together on a volunteer basis, get this momentum going and create something really cool,” Quantz said.

Besides homegrown programming, BSPA plans to feature state and national public radio programming, he said. In addition to the need for underwriting for shows, for an engineer to press buttons, and for the station in general, BSPA is seeking start-up grants that can be targeted to give KXIQ the strongest possible platform going forward, Quantz said.

He conceded that KXIQ was a “one-man show” under Ramirez, who ultimately downloaded 4,100 songs, still in rotation on the station in what Quantz described as a “massive shuffle.” Where else are you going to hear Patsy Cline follow Pink Floyd?

“We’re thinking about keeping an element of that, maybe for a long time,” he said.

Meanwhile, more people are tuning into the possibilities, Quantz said.

“More and more interest is being generated in partnering with the radio station, knowing that it’s community oriented and filling a need that Brownsville has,” he said. “I’ve been in meetings all day about the radio station, and with very positive feedback from everybody.”