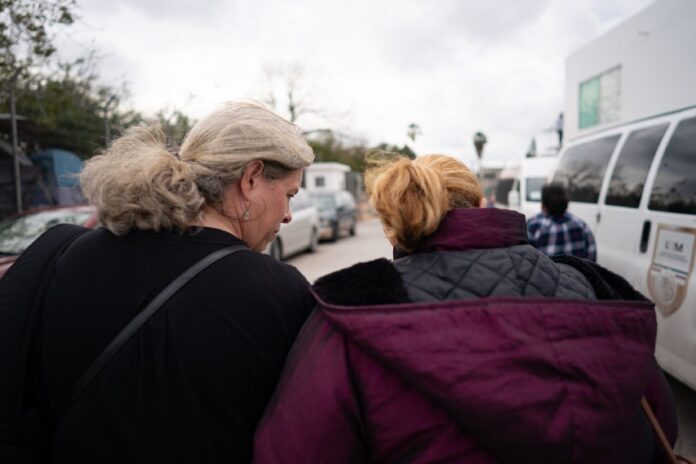 REPORTERS NOTE: Charlene D’Cruz confirmed in a Facebook post that Yodalys was sent back to Mexico on Monday evening. She was finally paroled late Monday night after D’Cruz received a phone call from CBP telling her to bring Yodalys back to the bridge.
_____

It was just past 9:30 a.m. as Matamoros-based attorney Charlene D’Cruz made her way across the Gateway International Bridge towards the United States on Monday. She was accompanied by a volunteer, who held the hand of an asylum seeker, guiding the woman across the river past a line of people winding well into Mexico.

The woman seeking entry to the country is blind. Yodalys, 52, presented herself at the bridge with D’Cruz four times prior. She was denied parole each time despite the fact that she has no vision in her right eye and can only see silhouettes.

Yodalys’ attorney said her vision has been getting steadily worse since her June arrival in Mexico. The condition was severe enough to prompt doctors with Mexico’s National Institute of Migration (INM, Instituto Nacional de Migración) to issue a petition in August while she was detained for 50 days in Mexico City.

“One of the things I understand is that she needs this assessment of the retina. They have to track where the parasite is and we have a letter that says it. There is no way to treat it here,” said D’Cruz

The INM document explained to U.S. Customs and Border Protection (CBP) that Yodalys has Toxoplasmosis and needs access to treatment. On Monday, D’Cruz presented the document in a set to a CBP supervisor who informed her that he would not make copies as it costs taxpayer money.

D’Cruz only received two of those documents back when a supervisor denied her client entry for a fifth time.

Yodalys recently began having epileptic seizures. According to D’Cruz, she is also a cancer survivor. She pulled out the bottle of medication given to her by doctors in Matamoros – the anticonvulsant Carbamazepine.

D’Cruz and other U.S.-based immigration attorneys find themselves on the bridge regularly under MPP. An attorney with ProBAR was also present on the bridge, accompanied by a family from Honduras. The mother and infant daughter had been waiting in Matamoros since August despite the fact that the father received asylum and is living in the United States, making the child eligible.

Almost immediately, officials at the international line granted D’Cruz permission to enter the checkpoint and ask to speak with a supervisor. Yodalys, who relies on others to see, became visibly upset in her absence. “The woman is blind, plus she needs medical care. She has terrible anxiety and she has PTSD. The PTSD is continual because she doesn’t know what she’s looking at,” said D’Cruz later during an interview.

The attorney has crossed numerous critically ill asylum seekers to emergency rooms in the United States. She keeps a list of clients like Yodalys who are supposed to be exempt from the ‘Remain in Mexico’ program under CBP’s own policy.

The agency has repeatedly denied D’Cruz’s sick and disabled clients entry and parole, granting exceptions on a case-by-case basis without following precedent. “I practiced disability law for a long time. I can tell you that deaf and blind people have the same standing under the Rehab Act,” said D’Cruz.

Guidelines published by the agency are vague and have created conditions where CBP officials without medical degrees are making decisions about who is paroled into the United States and who must remain in Mexico.

Yodalys’ has been repeatedly denied parole and is either sent back to Mexico or is sent to emergency rooms, where staff cannot treat her condition. “They don’t follow their own law. Why put us through this? Why do we have to have this many attorneys? It’s because they are emboldened by this administration and the fact that they can get away with this. And they don’t care,” said D’Cruz.

According to the attorney, the last time Yodalys went to the emergency room on Dec. 11, staff sent her back with medication to treat a headache. On Jan. 16, she had a seizure and was given life-saving medication by volunteer doctors at Global Response Management (GRM).

Guidelines published on Jan. 28, 2019 detail that “aliens in the following categories are not amenable to MPP” before listing undocumented persons claiming asylum under “special circumstances”, including those with “Known physical/mental health issues”.

This did not stop the agency from denying Yodalys entry Monday before reversing their decision an hour later. A supervisor spoke with officers stationed on the bridge before approaching D’Cruz with papers in hand.

He informed her that the case was denied before promptly turning around to walk back inside. “Shouldn’t these people still be excepted out under the vulnerability exception even if by mistake you did not put them in there?” asked D’Cruz of the policy.

The attorney said that officials “shrug their shoulders” at the questions she raises and that her pleas over the last few months have been ignored by the agency.

On Monday, the attorney was flanked by a documentary film crew, a Buzzfeed reporter, and volunteers. The media’s presence resulted in appearances from Port Director Tater Ortiz and Public Affairs Liaison Elias Rodriguez.

D’Cruz and her client went back to Mexico following the denial. An hour later, an attorney at the bridge received word that the agency changed its mind and decided to process Yodalys after all. The group walked the woman arm-in-arm back to the checkpoint, past the international line and into the building.

D’Cruz explained to Ortiz that her client is clearly disabled and in need of medical care and should not be put through such an ordeal.

On another occasion, CBP told D’Cruz that they could push back Yodalys’ court date so she had more time to find a doctor in Mexico City. “I explained to them today – do you expect a blind woman to do this and wait in northern Mexico until she comes back to court?”

Yodalys lives in an apartment in Matamoros with two other Cubans. They help her get to and from the house. On Friday, she was on the bridge too late. Her roommates were working. She waited and eventually had to ask a group of children for help crossing the street.

“People help me. But they can’t be with me all the time. What if I get kidnapped? I can’t take a taxi. I can’t see anything,” she said. Yodalys has two sons in the United States who are legal permanent residents. She also has two U.S. citizen grandchildren.

Whether the woman can cross, or whether she’ll be sent to the emergency room and then straight back to Mexico – remains at the whim of CBP supervisors. In most cases, D’Cruz is accompanied by a doctor from GRM who discusses the patient’s medical history with one of CBP’s medical staff.

These recommendations have been disregarded in the past and are irrelevant in Yodalys’ case, according to D’Cruz. “The question of whether she can access or afford treatment in Mexico is not the problem. Since she’s disabled, we shouldn’t even be getting this far.”

The attorney said that inside the building, officials held a door open and asked Yodalys to walk through for processing. “I had to remind them that she’s blind and that someone needs to hold her hand.”

Around 1 p.m. on Monday, Yodalys was being transported to the emergency room to treat chest pain stemming from an anxiety attack, her attorney said. Prior to processing, she shared that her last experience in a CBP processing center was terrifying. She said detainees slept on a cold floor. Yodalys had minimal visibility. Her current fears involve having another epileptic seizure in the agency’s custody.

D’Cruz regularly asks the agency to skip the “hieleras” and release the clients to her. Should Yodalys be paroled, the attorney will help coordinate her travel to family members. “I asked them, ‘Could you please not put her through hell? Don’t take too much time. I will wait for her.’”

In the case Yodalys is not paroled, D’Cruz sees no other recourse than to take the case to the federal court system. “There’s no other relief,” she said.