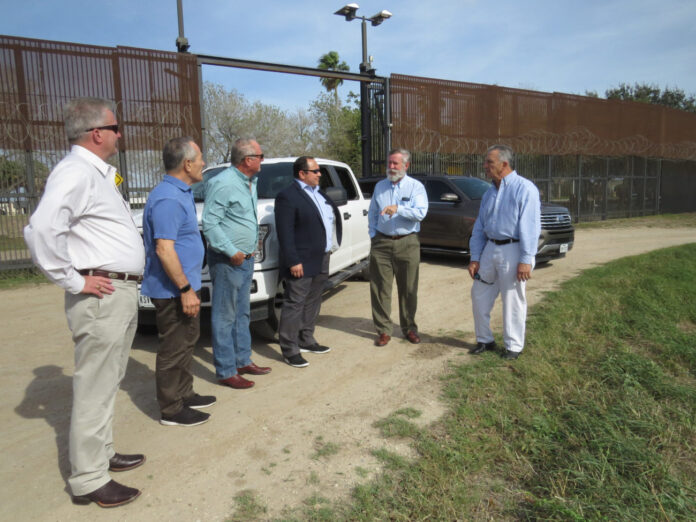 Alan Bersin, Bill Clinton’s “border czar” and the person Barack Obama chose to grapple with drug-related violence along the U.S.-Mexico border, stood on the levee south of the border fence downtown, surveying the banks of the Rio Grande below and, just to the east, Gateway International Bridge.

The former federal prosecutor was joined by Ramiro Aleman, director of business recruitment for the Greater Brownsville Incentives Corporation; Cameron County Precinct 2 Commissioner Joey Lopez; attorney and GBIC commissioner Dennis Sanchez; Mark Yates, director of the Cameron County Department of Economic Development and Community Affairs; and Sam Manatt, owner of the levee the group stood on that morning of Jan. 17.

Bersin is a global fellow with the Woodrow Wilson Center for International Scholars in Washington D.C., the inaugural North American fellow for the Wilson Center’s Canada and Mexico institutes, and chairman of BorderWorks, a consulting firm specializing in border security and management, including border infrastructure projects.

He was in the Rio Grande Valley to attend a retirement celebration for U.S. Border Patrol RGV Sector Chief Rodolfo “Rudy” Karisch in McAllen. Bersin took time out to drive to Brownsville to see where his friend Sam Marasco hopes to build via Americas, a riverfront redevelopment project featuring as its principal catalyst the Rio Grande Esplanade, a 16-acre, mixed use urban development, plus the Kris Kristofferson Cultural Center.

Marasco said Brownsville city leaders initially approached him about a possible riverfront makeover, a concept contained in the 2009 Imagine Brownsville Comprehensive Development Plan, based on the success of The Shops at Las Americas, a Marasco development that opened in 2001 in San Ysidro, Calif., a neighborhood of San Diego across the border from Tijuana, Mexico. It was through this project that Bersin and Marasco became acquainted.

“I was basically one of his early supporters on the government side in (Las Americas). … It was an extraordinary development,” Bersin said.

Bersin said he’s involved in a book project about the relationship between San Diego and Tijuana, and that the first chapter will be a look at the cross-border community created by Las Americas.

Since the city of Brownsville gave Marasco preliminary authorization to explore development of via Americas well over a decade ago, he’s secured commitments from the Department of Homeland Security and the International Boundary and Water Commission to cooperate with the city on the project if it chooses to move forward and certain conditions are met.

Investors through Marasco’s LandGrant Development company would pay 100 percent of the cost of public infrastructure improvements required for via Americas, and would be reimbursed through incremental increases in tax revenue generated by a riverfront Tax Increment Reinvestment Zone. A TIRZ is a mechanism for attracting investment to parts of a community where investment is scarce or nonexistent.

The Brownsville City Commission on Dec. 3 voted to approve a downtown TIRZ excluding the riverfront between Gateway and B&M international bridges, where Rio Grande Esplanade would be built. This was despite Marasco’s suggestion that the riverfront be included in the TIRZ, in order for him to approach the state about participating in Tax Increment Financing, which he said would enhance the project’s feasibility.

Manatt, who led the Jan. 17 levee tour, also argued the TIRZ to include riverfront — land he owns and would like to sell to LandGrant. Commissioners held the final vote Dec. 10 to approve a downtown TIRZ without riverfront property.

It’s normal for big development projects involving multiple governmental agencies and taxing entities to establish all conditions of participation up front so the developer and city planners know what to do in terms of the project’s specifics, Marasco said, noting that negotiating with large governmental agencies is a very slow process.

Sanchez said he helped form Brownsville’s first TIRZ in 2006, in the north part of the city, but that it took three years to get it approved because city leaders were wary of being taken advantage of.

“It’s part of the legitimate concern of city managers: Is this a scam? Is this the real deal? … We finally convinced them this is the real deal and they finally passed it, and now it’s showing that it works,” he said. “But now we have different city administrators and here we go again.”

Also, in the case of via Americas, the proposed TIRZ is more complicated, Sanchez said.

“Sam’s about the only guy I know who could do it,” he said. “If he can’t to it, well then, it’s not going to happen. But essentially that’s what I think the real concern is, is just people are just unsure of what’s actually happening.

“But the bottom line of any TIRZ is that it’s not your money — county, city, whoever. We, the developer, are going to put up 100 percent of the money to make this happen. If it works, great. If it doesn’t work, it’s no skin off your nose. They’re not asking for the city to guarantee any debt, not asking the city for any money.”

Deputy City Manager Helen Ramirez said the city is continuing to evaluate information Marasco has provided on the project, and will provide an update during the Feb. 3 city commission meeting.

Bersin said Brownsville’s riverfront and much of downtown resemble San Ysidro in the early 2000s — a community that appeared as though “its greatest days were behind it.” At the same time, Marasco’s proposal for Las Americas was “a major issue of controversy” back then, Bersin said.

“Getting to believe something, getting people to see a future, is always difficult,” he said. “I don’t hold that against people. Change is not easy. But over time, with business support, civic support and getting political leaders to understand it, you can actually create a new future.”

Assuming federal agencies and the state are willing to cooperate, Bersin said he hopes the city would pursue via Americas.

“Because in fact it’s a game changer,” he said. “It’s been a game changer for San Diego-Tijuana. … It was transformational among a whole series of changes that took place, and it would be altogether fitting and proper that Brownsville, on the far east side of the border, actually took a page out of the history of Tijuana and San Diego on the far west part of the border.”