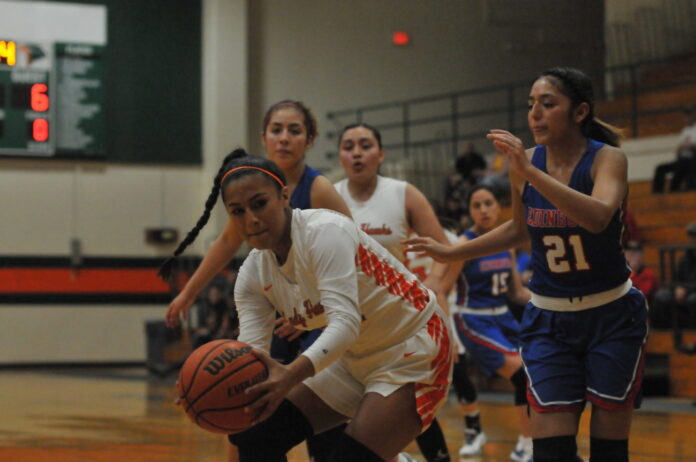 HARLINGEN — Tuesday night’s Bird Bowl will have city bragging rights on the line, but most importantly, first place in District 32-6A will be up for grabs when the Harlingen High Lady Cardinals play host to the Harlingen South Lady Hawks.

Both teams are entering Tuesday’s contest with confidence and swagger. Each team is 3-0 in district play as they near the midpoint of the district season.

“4-0 is our motto right now. We want to take things one game at a time,” South coach Kelly Garrett said. “We had a good practice this morning in preparation for Tuesday’s matchup.”

Harlingen High is coming off a physical road win at Los Fresnos, and South used a 13-point performance from Karla Reyes to help secure a 53-15 win over Brownsville Rivera.

Harlingen High has relied on a bevy of young talent, along with some veteran players on the team. Juniors Callie Cervantes, Sydney Portillo, Alyssa Salas and Alexus Coto all look to have an impact. Sophomores Avery Hinojosa and Emery Scoggins also have plenty of experience heading into Tuesday’s matchup.

“I think it is going to be a good matchup,” Lady Cardinals coach Ashley Moncivaiz said after Friday’s win. “From start to finish, it is going to come down to who wants it. It is not going to be easy, we have to go out and fight hard. So for us, we need to be mentally prepared on both ends of the court.”

The Lady Hawks are looking to snap a five-game losing streak to their crosstown rivals. The last time South beat Harlingen High was during the 2016-17 season, 55-49 at Harlingen High.

South’s team is a senior ballclub, one that is eager to earn a road win that would place them alone in first place. The veteran presence of Karla Reyes, Laura Ramirez and Bianca Gonzalez will be one key for the Lady Hawks.

“Having a senior ballclub makes the Bird Bowl important, especially to a lot of my kids,” Garrett said. “They know how intense the game gets and the atmosphere of it all. So it is important for them to go into it with the right mindset.”

On the boys side, Harlingen South also is looking to snap a skid against Harlingen High. The Hawks are 0-4 during their past four meetings. The last South win came during the 2016-17 season.

Prior to that, the Hawks had won nine of the previous 10 meetings under current coach Brian Molina.

The possible 2-0 start would be ideal for the Hawks as they look to keep pace with Los Fresnos in the district race. The Hawks opened district play with a 53-42 win over Brownsville Rivera on Friday night.

“The boys are focused and excited about Tuesday’s game,” Molina said. “They had an extra pep in their step in today’s practice and are looking forward to an intense rivalry game that seems to bring out the best in both schools.”

Harlingen High, meanwhile, hopes to avoid an 0-2 start in district play. The Cardinals dropped their district opener 71-57 to Los Fresnos on Friday.

“Putting yourself in that 0-2 hole is tough to come back from, and especially in a tough district,” Cardinals coach Clayton Cretors said Friday. “But we are going to talk about what we did wrong against Los Fresnos and transition very quickly into Tuesday, and start looking at personnel and matchups and get right back to work.”