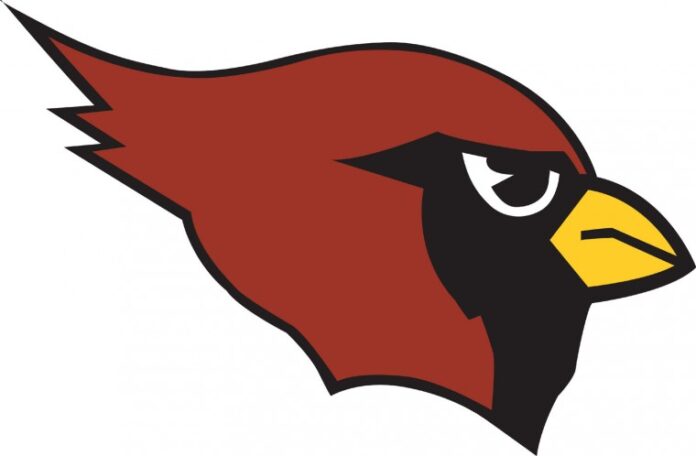 LOS FRESNOS — Much like a heavyweight fight, the Harlingen High Lady Cardinals and Los Fresnos Lady Falcons locked horns during the first half, neither team delivering the knockout blow.

That came in the third quarter, when Harlingen High’s press swarmed the Los Fresnos offense. The formula of the press along with a team-high 13 points from Callie Cervantes were the keys to a 60-46 win over Los Fresnos.

In the girls game, Harlingen High held a 31-21 lead at halftime. The Lady Falcons answered each shot from the Lady Cards during the first half and matched up physically.

The Lady Cardinals’ defense locked down during the third period, with a suffocating full court press yielding nine points in the frame, with six of them coming from the free throw line.

“In the third quarter, we finally turned it on,” Harlingen High coach Ashley Moncivaiz said. “We realized how to utilize our press, and early in the game the kids were not committed to it. Once they got committed to it, they stood their ground and didn’t retreat. That is why they looked a lot better out there.”

In typical Lady Cardinals fashion, the points were spread around. Juli Bryant once again stepped in and made plays on both ends of the court, scoring nine points. Sydney Portillo also netted nine points in the win.

“I think with Los Fresnos, it is a physical game every year. They train hard, and we train hard,” Moncivaiz said. “It was expected and they like that, and we knew we were going against someone who is going to make us work.”

The Lady Cardinals outscored the Lady Falcons 20-9 during the third period and saw their 10-point lead stretch to a comfy 20-point advantage.

Harlingen High takes a 3-0 district record into Tuesday’s Bird Bowl. Harlingen South also is 3-0, and it will be a tussle for first place in 32-6A.

“We just have to keep practicing and keep our minds focused,” Cervantes said of their Tuesday matchup. “It is going to be a big game but we just have to stay focused.”

“I told the girls that Harlingen is a physical team,” Valdez said. “We have to match that physicality, and my kids showed a lot of heart tonight. I think we are going to continue to get better, and maybe next time around it will be a different outcome. We have Hanna up next, so we need to regroup after the injures we had and just get better, and continue to push for that district championship that I still think is within our grasp.”

In the boys game, the Falcons began their quest for a sixth straight district title, shaking off a slow start and leaning on Luis Gonzalez, who netted a game-high 27 points, and Gerry Martinez, who finished with 20, to win 71-57.

The Cardinals’ defense came out aggressive and caused fits for the Falcons’ offense. Los Fresnos didn’t find the rim until four minutes into the quarter.

“It was one of our slower starts,” Los Fresnos coach Marco Hinojosa said. “But much credit to Harlingen (High), they came out physical and pressed the issue. You could tell they were hungry for a win, and because of them they caused four straight turnovers. Luckily we were able to capitalize.”

One key turning point was the injury to the Cardinals’ Michael Castillo. He suffered a right hand injury during the second quarter and did not return.

“He couldn’t play in the second half, and he is a major part of our team,” Harlingen High coach Clayton Cretors said. “It gave us a lot of adversity that we had to fight through in that second half, and it was tough to come back from it.”

The third period is when Gonzalez took over the game. Gonzalez scored 17 points in the frame and helped the Falcons take a 53-35 lead after three quarters.

“During warmups I was feeling good, so if I saw I was open I was going to take the shot,” Gonzalez said. “This wasn’t our best game, but we were able to get the win.”

Hinojosa also felt his team didn’t play as well as it has, but picking up its first district win is the first step.

“We are a senior-heavy team, and our boys do not get rattled,” Hinojosa said. “They are a poised team. I think we hit some big shots tonight and got a few key steals. Anytime you hit a 3 the crowd gets into it, and it gives us some momentum.”

The Falcons next travel to Brownsville Hanna, and Harlingen High will square off against Harlingen South. While Castillo’s status is unknown, the Cards know the importance of avoiding an 0-2 hole.

“It is something we talked about during the week,” Cretors said. “We did not overlook Los Fresnos, but putting yourself in that hole is going to be tough, especially in a tough district.”

Mike Vasquez led the Cardinals’ offense with 15 points, and Manny Gutierrez finished with 10.