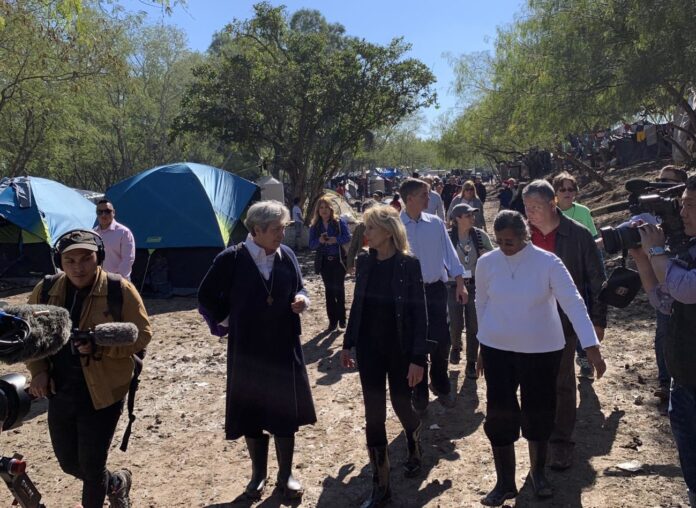 MATAMOROS, Mexico — Hundreds of migrants from the largest refugee camp on the United States-Mexico border lined up for food with mud caked on their feet following a rainy weekend in the Rio Grande Valley that left their squalid camp a muddy mess.

Tamales, beans and rice from Taco Palenque were on the menu and Dr. Jill Biden — the former Second Lady of the United States and a campaign surrogate for her husband Joe Biden, a leading contender for the Democratic nomination in 2020 — was about to arrive with her host, U.S. Rep. Filemon Vela. An early Christmas meal is the least they could do, Vela said.

“Buen provecho,” Biden said to a young boy as she handed him a plate.

It was Biden’s first time at the camp, which she repeatedly called “heartbreaking.” She was also in town for two fundraisers, as her husband and former Vice President Joe Biden seeks to win the Democratic nomination for president. Immigration could be a key issue in the election, yet the “Remain in Mexico” policy, which has left thousands of migrants stranded in Mexican cities, has not been a focus for many of the campaigns.

Perhaps Sunday’s visit could change that. The group handed out 1,500 plates, which represents about half the population of the refugee camp that is full of mostly Central American migrants seeking asylum in the U.S. But border officials in the U.S. have sent the migrants to Mexican border cities to wait for their asylum claims to be adjudicated starting in early 2019.

Vela and Biden walked with Sister Norma Pimentel, executive director of Catholic Charities of the Rio Grande Valley, and Mike Benavides of the volunteer group Team Brownsville, into the heart of the camp.

“Can you imagine living in these camps for months?” Pimentel asked Biden, as they walked between tents with homemade stoves on top of old washing machines and clothes hanging on trees like Christmas ornaments.

Many of the migrants seeking asylum who have been living in the camps in Mexican border cities like Matamoros used to end up with Pimentel’s organization in McAllen. That process began in 2014: The U.S. authorities, after apprehending asylum-seeking migrants at the border and briefly holding them at their facilities, would then drop migrants off in downtown McAllen.

Catholic Charities, backed by the city of McAllen, would take them in and provide clothing, food, shelter and showers, before the migrants would often board buses to the McAllen bus station to live with families or a sponsor elsewhere in the U.S. while their asylum claims were adjudicated.

Catholic Charities was forced to move its migrant care operations earlier this year to a different space following a dispute with city officials and some residents, but that resulted in a much larger facility, which is across the street from the bus station.

During the summer, U.S. House Speaker Nancy Pelosi and a group of House Democrats visited the building to tell the dozens of migrants there that they were welcome in the U.S.

“We come here to make sure that we’re honoring the dignity of the migrants coming into our country, that the conditions they’re being met with meet their needs, but that also respect their dignity and honor the values of America,” Pelosi said. “When we don’t respect the dignity of all of those migrants, we lessen ourselves.”

Conditions have gotten much worse. The Catholic Charities building is mostly empty now — when authorities apprehend migrants at the border now, they often send them to Matamoros and other border cities instead of Catholic Charities and other similar organizations, a policy that began in early 2019.

But there have been serious dangers in Mexican border towns. The U.S. State Department advised U.S. citizens to not travel to Matamoros and to the state of Tamaulipas due to “organized crime activity — including gun battles, murder, armed robbery, carjacking, kidnapping, forced disappearances, extortion, and sexual assault,” the advisory said, calling it common along the northern border. The State Department placed Tamaulipas in its most severe category: Level 4 – Do Not Travel.

A New York Times report said: “There have been 636 documented cases of violent attacks, including abduction and rape, against migrants who were returned to Mexico by United States authorities since the Remain in Mexico policy began in January, with 293 attacks in the last month alone, according to Human Rights First.”

Biden discussed the lawlessness: “There’s so much danger here for the families, for the young women, for the girls — from kidnapping, to sex trafficking, to disease, to violence. There’s so much here that needs to be addressed and we need to step in and help these people.”

Vela said the “Remain in Mexico” policy that led to the camp in Matamoros is worse than when the Trump administration initiated a policy to separate families at the border in 2018.

“Our Constitution is being ripped apart,” Vela said. “Because these people are entitled to an adjudication process. They may win it or they may lose it. But at the end of the day you have to ask yourself, what harm is it to have people who have a right (to a) constitutional process of asylum claims to have them go stay with their families in the United States while they adjudicate their claims? It makes no sense.”

Benavides, a school teacher who has been crossing the border and helping migrants since he helped start the volunteer organization Team Brownsville, said migrants at the southern border should not be characterized as “bad hombres,” a reference to what President Trump has called migrants.

“They’re not dangerous, they’re endangered,” Benavides said. “And then our government has left them in the dangerous country. They’re good people — I just want to shout that from the mountain tops. These are good people, they’re obeying the laws. I was a soldier. I served in the military, I went to war. Feeding these people, hugging them, supplying them with the things that they need is the most patriotic (thing) I’ve ever done in my life. I’m representing what America really is and what America represents.”