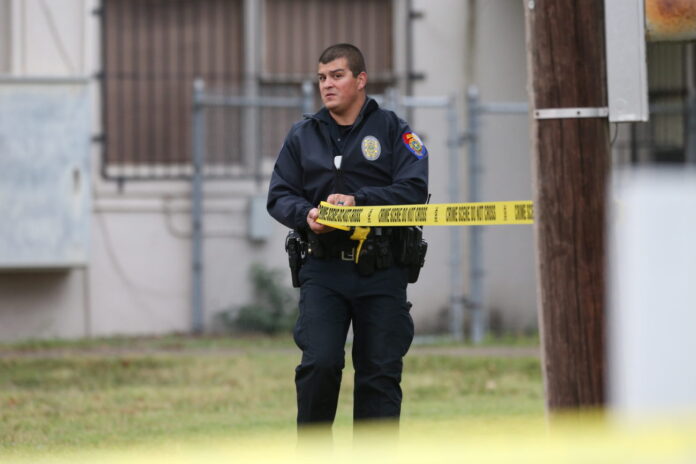 The Edinburg Police Department believes the violent incident Tuesday that left four people dead from gunshot wounds is a triple homicide with the suspect committing suicide.

“This is still sensitive and complex and will be investigated to the fullest as we do with every investigation,” police said in a news release. “Investigators are exhausting every lead and examining every piece of evidence to get answers as to why this tragic incident occurred.”

“During this investigation, we located four adults deceased from possible gunshots,” Chief Cesar Torres said during a Tuesday afternoon press conference. “Also found at the residence was a male toddler who was unharmed.”

Torres said the child is being monitored and is safe.

Authorities have not identified the victims or suspect despite Torres saying Tuesday that the identities of the dead would be released after their families were contacted.

Just before the press conference Tuesday, an investigator at the crime scene was seen in the police department’s lobby talking to a crying family. Another emotional family was also seen grieving in the lobby.

On Wednesday, Torres said during a brief phone conversation that investigators were not going to identify the dead until autopsies were performed, adding that the information may be released Friday.

Authorities have said a mother, her daughter, a home healthcare provider and a man who was possibly the boyfriend of one of the women were killed in the incident.

Three of the people were found inside the apartment and another person was found at a separate location.

“With further investigation, a fourth person has been found deceased at a separate location,” police said on Facebook. “It has been verified that the fourth homicide is in relation to the previous three homicides reported.”

Police have not disclosed where this person’s body was discovered.

Torres did not take any questions during Tuesday’s press conference and a spokesperson declined Wednesday to provide any new information on what occurred at 301 W. Kuhn St.

Two neighbors told the newspaper Tuesday that they did not hear any gunshots or any kind of disturbance.

One of those neighbors, who said he was interviewed by police, saw and heard a man making a 9-1-1 call just before 7 a.m. when he took out the trash.

When that individual, who the neighbor described as nervous and rambling, saw the man taking out the trash, the man left the scene.