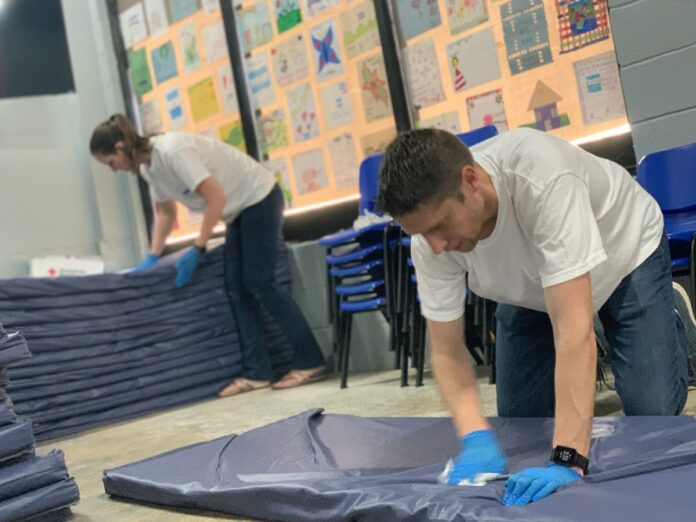 McALLEN — Nearly 40 young lawyers from across Texas on Saturday walked into the migrant respite center in downtown McAllen to make sandwiches for people without much legal representation.

Some attorneys folded clothes and mopped the floors. Rebecca Linehan, a prosecutor from Midland, was on her hands and knees scrubbing clean blue gym mats.

“It’s a great opportunity to see other parts of the state,” Linehan said of the trip, which was part of the Texas Young Lawyers Association’s quarterly meeting held in McAllen this weekend. “Especially when us in west Texas are five hours from anything interesting.”

There were only a few families at the respite center on Saturday and they were relaxing and watching television, so the group of lawyers helped clean the facility and prepared food for the immigrants waiting in Matamoros to seek asylum in the United States. A new Trump administration policy has left migrants stranded in border cities and dwindled activity at the humanitarian respite center in downtown McAllen next to the bus station.

But a trip to the facility in McAllen has become a trend now for visitors vaguely interested in immigration — from school volunteer groups to athletes and celebrities to members of Congress. Since 2014, when a surge of Central American migrants crossed the border into South Texas, and in the years since, federal authorities have dropped the migrants who are seeking asylum in the United States off at the bus station.

From the beginning, Catholic Charities of the Rio Grande Valley has assisted the migrants upon their release from federal custody. Michelle Nunez with Catholic Charities presented much of this information to the attorneys during a meeting Saturday morning at the Casa de Palmas hotel.

Many attorneys shook their heads at the photographs Nunez displayed of malnourished migrants they’ve helped feed and clothe at the respite center. Attorneys also seemed surprised at some of the statistics in a presentation about immigration law.

Victor Flores, this year’s TYLA President who is from McAllen and now works as an attorney in Plano, wanted to bring one of the organization’s meetings to McAllen.

“We wanted to show them what south of San Antonio is like,” Flores said, and to that end, people such as Mayor Jim Darling, attorney Ray Thomas and attorney Brandy Voss, who is also running as a candidate for a seat on the Texas Supreme Court, spoke to the attorneys in town.

Flores and the TYLA, which consists of roughly 27,000 Texas lawyers who are 36 years old or younger, also presented Rio Grande Valley attorney Christina Saldivar-Garcia with a “resolution for her commitment to the legal profession and pro bono service to the people of McAllen, Hidalgo County and the State of Texas.”

And with the McAllen area comes a type of law with which not all attorneys are well-versed. Laura Sepulveda, part of the TYLA and an assistant Hidalgo County District Attorney, created a large immigration law guide.

She discussed rapidly changing immigration policies under the Trump administration such as the “Muslim ban,” the family separations policy and the remain in Mexico policy that is currently playing out in Matamoros and other Mexican border cities.

Nunez, with Catholic Charities, told the lawyers that legal services are needed in Matamoros. It’s tough, Nunez said, to connect migrant clients with attorneys, since the migrants are camped out in tents in Matamoros while they wait for an immigration court hearing in the U.S.

Catholic Charities has started a program called “Project Dignity Matamoros” to try to help the migrants.

“If interested,” Nunez told the attorneys, “you’re more than welcome to assist.”