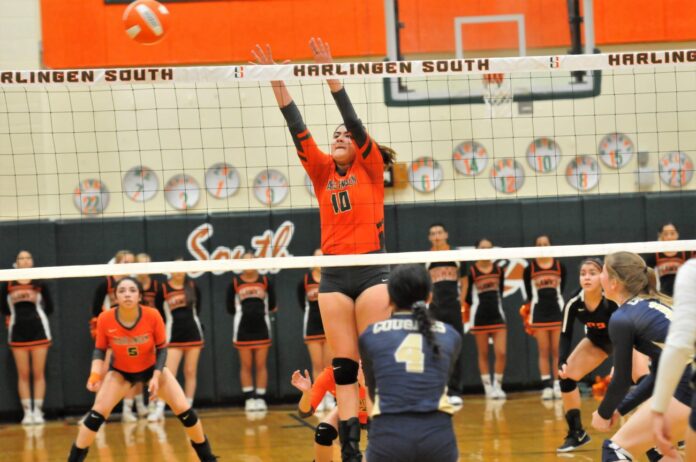 HARLINGEN — Two years ago, when Harlingen South hired coach Anissa Lucio, the Lady Hawks were looking for a fresh start and hopeful that Lucio would bring a spark to a well-grounded volleyball program that had fallen off the map.

While her first year was rough and South missed out on the playoffs. Lucio kept the playoff vision in mind. Last year, South reached the playoffs and was the feel good story of the season.

The process that began two years ago has taken shape, and now with a pair of playoff wins under their belts Lucio and company have a rematch with perennial power McAllen High in the Class 6A area round, with the time and date to be determined.

“I think this was the mission we were on,” Lucio said. “It is something we talked about early on when they were sophomores, and we knew this was going to be a team that was going to pull it together. We were able to piece it together, and it is exciting to see it come together.”

There are seven seniors on the Lady Hawks’ roster. Senior Odie Vidana was one of the them, taking part in the rebuild and seeing the process pay off.

“We have always been talented,” Vidana said. “This year we worked together and coming into tonight we had a game plan, and we all knew what our job was and we played it well tonight. Coach saw what we had then and told us we would be good. We worked hard all this time, and now we are seeing it pay off. I felt a lot of emotion tonight but I was also nervous, but I knew my team would have my back.”

Harlingen South improves its record to 35-8. Last year, South went 20-17 and snuck into the playoffs. This year, the Lady Hawks continued to build and are out for much more.

“We have made a big improvement from where we started my sophomore year when Coach Lucio first got here till now,” Aguirre said. “So many things have improved and we have grown, and Coach Lucio has helped us grow as a team and individuals.”

Standing in their way is McAllen High. The Lady Bulldogs are led by longtime coach Paula Dodge. This year, McHi is 43-2, and are coming off a sweep against Laredo United South.

“They are an awesome team, hands down,” Lucio said of McHi. “We are excited for this match. We know it is going to be a high-intensity match.”