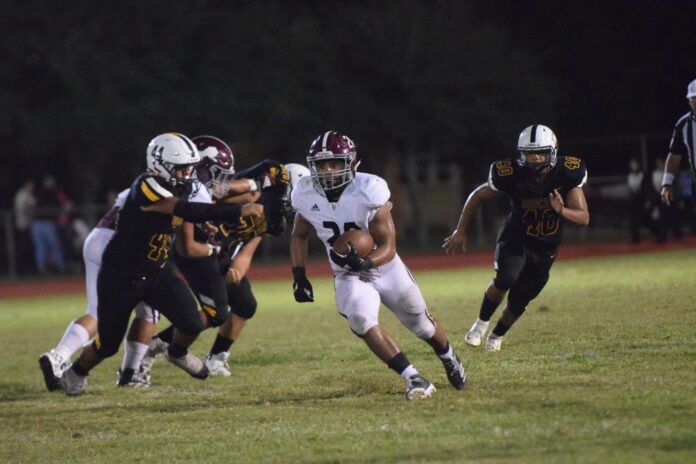 RIO HONDO — The La Feria Lions defeated the Rio Hondo Bobcats 49-28 for the first time since the 2012 season in the Valley Morning Star’s Game of the Week.

The Lions are 6-0 as they head into district play next week. The big question mark moving forward will be the status of senior quarterback Dorian Hernandez, however.

Late in the second quarter, Hernandez injured his left forearm while stiff-arming a defender. Junior quarterback Dario Sanchez, who had been alternating drives with Hernandez before the injury, re-entered the game and led the offense on a scoring drive on the final possession of the first half.

Hernandez missed the remainder of the game. His status for next week’s district opener is questionable and will be evaluated further.

“We don’t know much right now,” La Feria coach Oscar Salinas said. “We will look at it tonight, and we just wanted to keep him out as a precaution. It is a left forearm injury, and we will see how it goes. We will send him to the doctor (today) and get it evaluated.”

On the Lions’ first drive, it took them three plays to find the end zone. A 25-yard TD run from Hernandez gave the Lions a 7-0 lead.

Sanchez, a seasoned backup who has started games in his career, filled right in for the Lions’ offense. On fourth-and-7, he threw a 29-yard touchdown to Caleb Flores in the back of the end zone to gain confidence and give his team a 14-0 lead.

Sanchez started for the Lions last year against Raymondville, so if he is needed next week in the district opener against Kingsville King, Salinas knows he can get the job done.

“Dario stepped in, and that is what we have talked about, is the next-man-up mentality,” Salinas said. “This year, we have done a good job early in the year with scrimmages and letting Dario work with the first-team offense. You never know with this game. He has some experience and he came in and was poised, and we were able to do the same things we would do with Dorian. But Dario does a great job with the offense.”

Rio Hondo cut the lead to 21-14 late in the second quarter after recovering a fumble. The second score of the night came on an 8-yard pass from Matt Trevino to Zachariah Rios.

With 51 seconds left until halftime, Sanchez hit Derek Perez on a screen pass that went 59 yards for the score, broke any momentum Rio Hondo had and gave the Lions a 27-14 halftime lead.

“It did, It did,” Rio Hondo coach Rocky James said. “I thought we played well. We spotted them 21 quick points, but we fought back and showed a lot of heart. That is something we had been missing, but I feel we have grown as a team from last week to this week.”

The Lions’ offense showed no signs of slowing down during the second half and outscored Rio Hondo 22-7. Sanchez threw a pair of touchdown passes to Flores.

Junior running back Avishai Dickerson ran for three rushing touchdowns on the night.

“We were going to run the ball a little bit more tonight,” Salinas said. “We just went run heavy, and it was there. All three of our backs ran really well, so why throw it? We struggled a little bit tonight on the back end, but it was just a game-plan situation.”

Rio Hondo has its bye week next week before it opens district play against Raymondville.