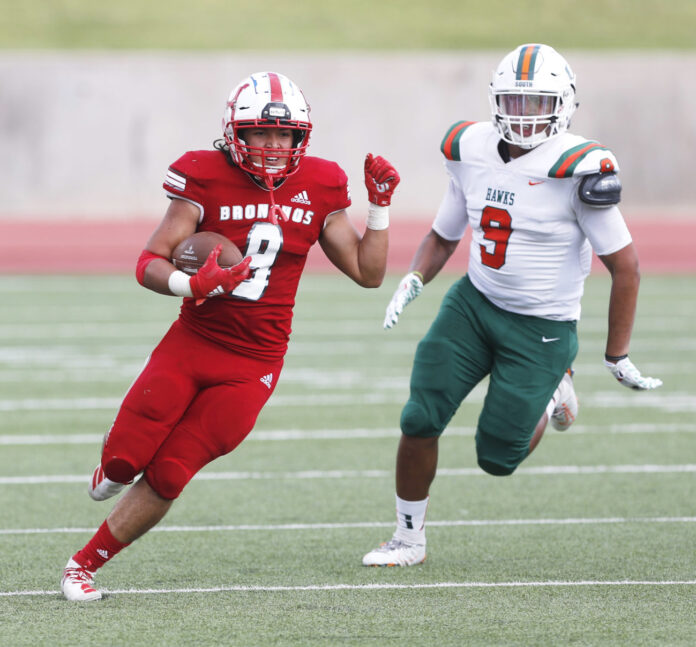 When its back was against the wall, the Odessa High football team leaned on what it had success with.

The Bronchos regrouped and ran the football to rally during the final quarter, defeating Harlingen South 44-33 on homecoming Saturday at Ratliff Stadium. Odessa High finished with 423 yards rushing and outscored Harlingen South 22-0 in the fourth quarter.

“We wanted to be the more physical team and finish what we started,” Odessa High coach Danny Servance said. “I thought our kids did that. We had some mistakes that we need to fix, but our kids played so hard today.”

Said Harlingen South coach Brian Ricci, “Odessa High has a lot of big guys up front and they just wore us down late. We just made mistakes at the end of the game, and we couldn’t close it out.”

The Bronchos completed the comeback under the guidance of sophomore quarterback Diego Cervantes, who started Saturday’s game in place of the injured Ivan Miranda.

Cervantes finished with 172 yards rushing and three scores, added 110 yards passing and one score, and did not turn the ball over. Running backs Senjun McGarity and Michael Salas added 161 and 121 yards, respectively.

It was the first time that Odessa High had three 100-yard rushers in a game since a game against Amarillo High in 2008, when Derrick Teegarden, Bradley Marquez and Ronnie Marquez accomplished that feat.

“I can’t say enough about what Diego did today,” Servance said. “He was pressed into action and did a great job of managing the game.”

Cervantes got off to a good start early, leading the offense down the field on a 10-play, 75-yard drive that was capped off by the first of his three rushing touchdowns from 19 yards out. He later added two points on a conversion run to build an 8-0 lead. He added a 40-yard rushing touchdown during the second quarter as well.

Harlingen South responded with its own ground-and-pound style as running back Marcos Gonzales capped off the Hawks’ opening drive with a 10-yard touchdown run. Gonzales finished with 98 yards and three scores on 22 carries. He added another scoring run of 3 yards after the Bronchos punted on their next drive to give the Hawks a 14-8 lead.

Missed opportunities and mistakes were the stories in the second quarter. The Bronchos failed to score from inside the Harlingen South 10-yard line and later had a bad snap on a punt that set up a short drive for the Hawks at the end of the first half.

The Bronchos’ defense turned away the Hawks the first time, but Harlingen South regained the lead with 19 seconds left in the half on an 8-yard touchdown pass from David Torres to Brady Bennett that put the Hawks ahead 20-16.

The second half turned into a roller coaster as the teams took turns taking the lead. A 30-yard touchdown run by McGarity on the second play from scrimmage during the third quarter put Odessa High in front again, but a pair of blunders on special teams gave the Hawks an 11-point cushion heading into the final quarter.

A bad snap over the punter’s head set up the Hawks for a Gonzales touchdown, and the Hawks forced a fumble on the ensuing kickoff that Josiah Castillo ran back 25 yards for a score. Harlingen South had its largest lead of the game in the span of 14 seconds.

“Coach (Servance) told us to show them what time it is,” Cervantes said. “He believed in us and ourselves, and we were able to get those scores late.”

Odessa High buckled down and regained its rhythm, as Cervantes led the offense on three scoring drives during the final quarter. A 31-yard run on fourth-and-2 helped cut the deficit to three, and a screen pass to J.C. Ramirez turned into a 58-yard score to give the Bronchos a 38-33 lead with 7:11 to go.

The last score, however, came with some drama.

A forced fumble near the goal line gave the Hawks new life after recovering the ball in the end zone. The Odessa High defense came through with its biggest play of the game as Cade Mendoza recovered a fumble on the next play. That set up a 19-yard touchdown run by McGarity with 1:39 remaining to seal the game.

“We found that fire late,” Mendoza said. “That’s what we’ve been trying to get in this team all season, and I think we finally found it. I think this will give us some momentum going into district.”