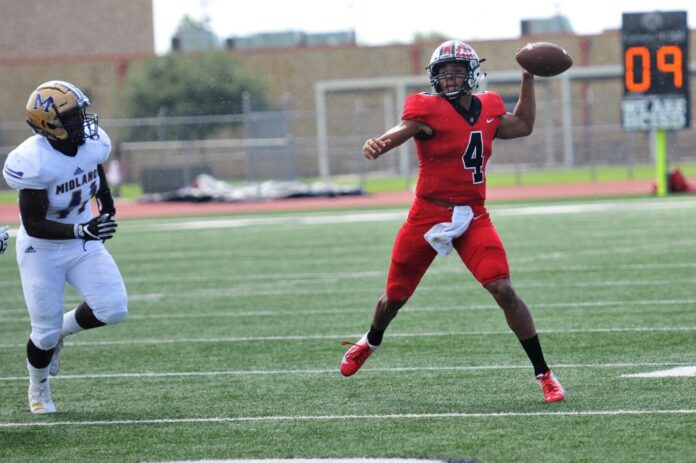 HARLINGEN — After missing a field goal on its opening drive and allowing Midland High to find the end zone, Harlingen High quickly settled in and rattled off 35 unanswered points.

The Cardinals leaned on seniors Jaime Galvan and Rayden Berry en route to a 49-13 thumping of Midland High on Saturday.

“We practiced hard all week, and we worked to get to this point,” Berry said. “On offense we did well today, and we had some success in the screen game and that was by design. We came in with a game plan and different ways to attack them. The coaches did a great job on preparing us.”

Berry gave Harlingen High its first lead at 7-6 on a 17-yard touchdown run and, on the next possession, Galvan hit Berry in stride for an 85-yard touchdown that put the Cardinals ahead 14-6.

Berry wasn’t done there. After the defense recovered a fumble, Berry scored from 28 yards out and opened the floodgates. Galvan called his own number and ran for a 67-yard touchdown, giving Harlingen High a comfortable 28-6 lead with less than two minutes left in the half.

After a punt, Harlingen High got the ball back with 1:08 seconds left in the half and managed to find paydirt. Galvan hit his brother, Justin, for a 35-6 lead at halftime.

“For one, our staff did a tremendous job. They schemed their butts off on offense, and it showed,” Cardinals coach Manny Gomez said. “I’m proud of my staff for preparing the kids, and the kids responded. They knew what to do, they saw it on film and they studied the film all week. It worked right on for us again. I’m proud of my staff.”

In the second half, Galvan picked up where he left off and tossed another score to Berry. Galvan accounted for three touchdowns, and Berry sniffed the end zone four times.

The final touchdown was a special one for the Cards. Senior foreign exchange student Andrea Constanzi took a 32-yard jet sweep for his first touchdown of the season.

Moving forward, Big Red is as healthy as it has been all year, and the offense is averaging 29 points per game and has scored more than 30 points in three of those games. The defense also hit its stride and has become a strong unit, led by linebacker Gabriel Martinez and defensive lineman Noah Cruz.

“Early on, we knew we were going to have to grow and evolve on defense,” Gomez said. “We knew we had more guys on offense that were more battle tested, but the kids have grown up and we are playing some great defense, so it is the perfect timing. It is a cliché, but timing is inevitable in what we do. But this team is playing great, and we love what we are doing.”

“Anytime you can come out with a win, it’s a good thing,” Gomez said. “We are 4-1 and are heading into district play healthy. This is a momentum-changer for us, and we are proud. We are going to take the bye week and take some time off, and will work on fundamentals. Once that time comes, we are going to get it going again and get ready for the Battle of the Arroyo.”