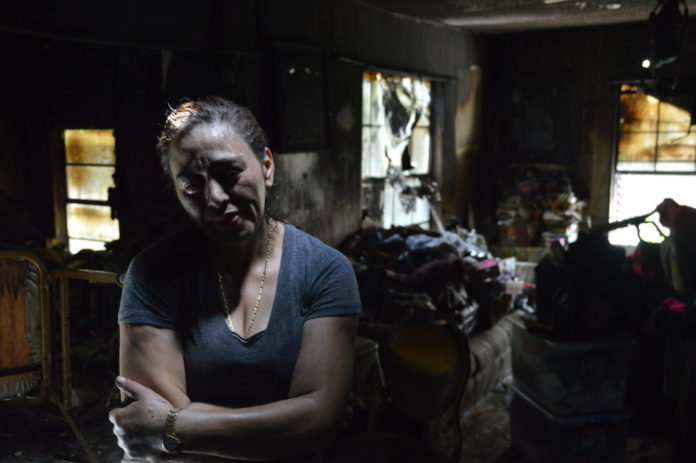 The Pharr Fire Department responded to the house in the 300 block of W. Kelly Ave. around 5 a.m. Sunday morning with five trucks. Pharr Fire Chief Leonardo Perez said the cause of the blaze is still under investigation.

“There was very heavy damage,” he said. “It took a while before we put it out. We’re very glad the residents were able to get out.”

Aurora A. Fonseca, 45, says she lived in the home all her life. On Sunday night she, her mother, her daughter and the family’s nanny were all home. Fonseca says a premonition awoke her in time to save herself and her family.

“At four in the morning I was in my room and I felt it, with my heart, that something wasn’t right,” she said. “All of the sudden I saw the whole closet explode and catch on fire.”

Fonseca rushed to her 10-year-old daughter’s room and carried the sleeping girl out of the house and away from the flames. She then turned around and went back into the house to save her 85-year-old disabled mother.

“I promised my father to never leave my mother,” she said. “God gave me the strength.”

While she sustained some injuries helping her family out of the house, all four occupants escaped relatively unscathed.

“I hurt my back and I hurt my body, and I got cuts and bruises, but I got everybody out except for the pets, they are dead,” she said.

The family’s two weenie dogs, chihuahua, and a litter of six puppies all burned to death in the fire.

Just after 1 p.m. Sunday, Fonseca had begun the process of trying to salvage some of the family’s possessions. Among the wreckage were books with charred covers and water-bloated pages; plastic toys melted into piles of slag; doors knocked off their hinges with holes burned through them.

Firefighters continued working at the scene, ripping up pieces of tin to find a hotspot under the rear of the home’s roof. Occasionally one of the toys that had survived the fire would emit a playful, electronic growl from the dark recesses of the home.

Fonseca’s focus Sunday was on providing for her daughter Allyson Pinyon, a student at Vanguard Academy.

“Her clothes got burned, I need donations to buy her uniforms again,” she said. “I don’t have any money.”

Fonseca and her family are currently accepting donations to replace possessions lost in the fire. A fundraiser has been created for the family and contributions can be made at https://www.gofundme.com/f/znwbx5-lost-everythingplease-help.