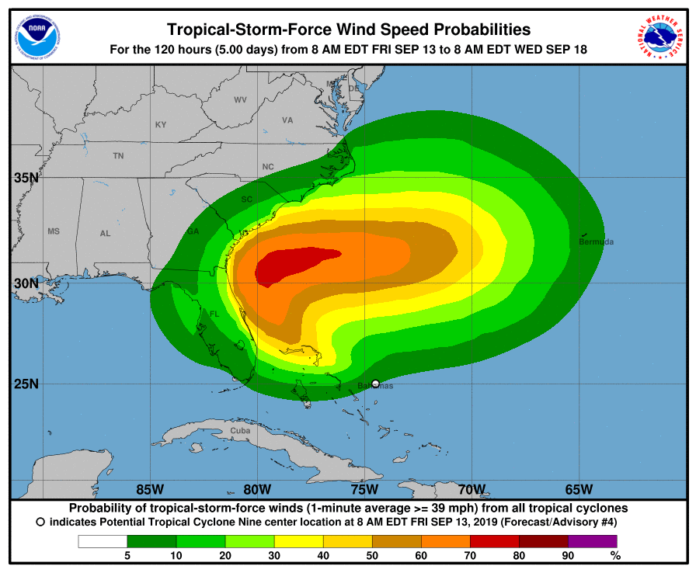 ORLANDO, Fla. — Tropical disturbance could form into Tropical Storm Humberto and threaten Florida’s east coast, according to WOFL-Fox 35 meteorologist Jayme King.
Tropical Storm Humberto is highly likely to form in the next 24 hours as it descends upon the Bahamas on Friday before moving north to Florida, the National Hurricane Center said in its 11 a.m. update.

“Potential Tropical Cyclone Nine” is moving northwest at 1 mph and is expected to pick up speed. The system has maximum sustained winds of 30 mph; if and when its sustained winds reach 39 mph, it will be named Tropical Storm Humberto.

“The system is barely moving, but is expected to resume a slow motion toward the northwest and north-northwest later today,” National Hurricane Center forecaster said. “On the forecast track, the system is anticipated to move across the central and northwestern Bahamas today, and along or near the east coast of Florida Saturday and Saturday night.”

A tropical storm watch is in effect from the Jupiter Inlet to Flagler-Volusia county line. The latest projection has the storm shifting east so its center is off the coast of Brevard County by 8 p.m. Saturday with 45 mph winds and 50 mph gusts, then off Volusia County at 8 a.m. Sunday with 60 mph winds and 70 mph gusts.

The storm is expected to bring heavy rainfall for the Bahamas and much of eastern Florida.
A tropical storm watch means tropical storm conditions are possible within the watch area, generally within 48 hours.

The NHC added that conditions are favorable for the disturbance “to become tropical depression or a tropical storm during the next day or so.” Forecasters said its formation chance is 80% in the next 48 hours, and 90% over the next five days.

The system’s track show’s signs of it bending east, said WOFL meteorologist Jayme King.
“There is much uncertainty in the current forecast,” King said. “A lot of the global models have this thing bending more to the east, maybe like what we saw with Dorian, but we don’t want to let our guard down. Tropical storm conditions are possible Saturday night (in Central Florida)and very early Sunday.”

“Global models develop the system and guidance suggests that the cyclone could even reach hurricane intensity by the end of the forecast period,” forecasters said in the 11 a.m. discussion. “By then, the system is expected to be over the Atlantic well southeast of the coast of the Carolinas.”

The Sunshine State is expected to receive between 2 and 4 inches of rain Saturday and Sunday, which could produce flash flooding, the NHC said. Central Florida faces a 10% flash flood chance, but significant storm surge is not expected along the coast.

“There is a greater uncertainty than usual in heavy rainfall prospects farther north across the Carolinas,” the NHC said.

The system is expected to be north of Jacksonville by Monday with strengthened winds and gusts, both up to 60 mph.

“As we saw last year with Hurricane Michael, these things are sometimes quick developing,” he said. “I think because Dorian was such a slow-moving storm, people kind of waited (and) waited. Just understand that this stuff can happen quicker, so just keep looking out for what’s going on.”

While the system could have minimal impact on Central Florida it’s important to be ready for the worst, King said.

“Keep in mind this is not a hurricane, but don’t let your guard down,” King said. “Even in tropical storms you can have powerful gusts, there are possibilities of isolated tornadoes and a host of other factors that can unfold. Be ready and stay with us for the latest.”