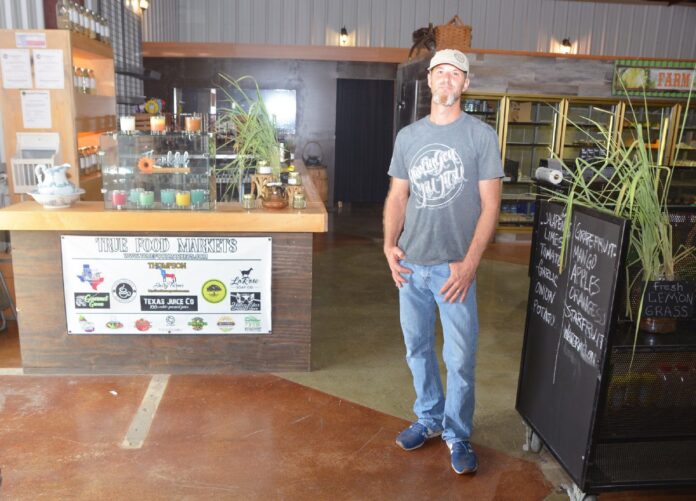 HARLINGEN — After a year of planning and prep, the goats finally have their own selling space.

“It was just an open, empty warehouse,” said Adam Thompson, general manager at True Food. “We started our farm about 2010 and we really directed it at dairy in 2014. We’re the Thompson Dairy Farm and we do all the goat cheese.

“We’ve done farmers markets from here to Corpus, Kingsville and even Austin a little bit,” he added, referring to his wife, Lori. “When we got out of the health care field we were looking at pushing the farm a little more but we needed somewhere to sell the cheese seven days a week, so that was kind of the original idea.”

Valley Star Fruits is providing a lot of the fresh produce at True Food, and the Thompsons are pushing ahead with creating foodstuffs sourced from Valley fruits, vegetables, dairy and meats right on-site.

“We have a food manufacturing license also, so the last couple of years we made cookies and biscottis so we’re bringing that stuff out also,” Adam Thompson said. “We just started making jellies and this lady’s been helping me a little bit, mentoring me. I’m a cheese guy, not really a jelly guy. But they go great together.”

Some of those True Food jellies include jackfruit, star fruit, grapefruit and raspberry-serrano pepper. “Really the only thing not local is the raspberries, but the serranos in there are local.”

The market has organic and non-organic foodstuffs, and sells local, Harlingen-area beef.

Just this week True Food began putting home-made pizza and sandwiches on the menu, and Thompson believes part of the foundation for his market will be the served food element.

“The café is the other thing,” he said. “I’ve been in the food industry for a long time. I used to be a chef in Baton Rouge and managed over at the Grapevine Café for a while.

“We’re doing cold-brew coffees using our organic, fair trade beans that are all roasted at the Grapevine,” he added of the South Padre Island eatery. “We’re doing smoothies. Some of these are purchased fruit but also when we have mangoes here and they get ripe, we will cut and process them to make smoothies so a lot of the fruit is local fruit.”

The Thompson Dairy Farm, located near Los Fresnos, has given Lori and Adam experience in dealing with big-volume retailers, selling goat cheeses to H-E-B and food giant Sysco.

“This is a state-licensed kitchen also and one of our thoughts and ideas is to bridge that gap,” Thompson said. “We’ve sold cheese to H-E-B; we still sell cheese to Sysco. So we’re seeing both sides and we’re trying to be kind of that stepping stone for people at the farmers markets that have a product, a good product that tastes great, and can’t sell it in a store due to cottage law. We can’t re-sell cottage law stuff. But if they make it here, they can sell it all week. We’ve already started doing that.”

Cottage law refers to Texas safety regulations which basically forbid people from selling food products they make in their own kitchens if those foods require refrigeration. State-licensed kitchens can produce these perishable food items for sale.

Goat cheeses at True Food come in a variety of styles, from soft to hard.

“Our standard cheese is, if you see goat cheese on the menu they’re talking about chevre, which is a French-style goat cheese and it’s your most common,” he said of the spreadable cheese often flavored with chives.

“But we do aged cheeses anywhere between three months to 18 months. Fontina is an Italian-style cheese. We make marinated fetas, and those were in H-E-B for a couple of years. Then Swiss, Manchego, Gouda, queso fresco. And we do the goat milk — chocolate milk, yogurt smoothies, lattes and we do goat milk soap,” Thompson added.

The market also sells loose herbs and teas as well as essential oils. Thompson said his store is adding 50 to 100 new products every week.

So far True Food has had to extend business hours on Fridays and Saturdays to 8 p.m. due to late-evening customer demand.

The prospect of opening earlier is up in the air.

“I have to milk those goats every morning, and I get in here as quick as I can,” Thompson said.

PRODUCTS — is a specialty seller of locally grown and made products and fresh foods. They produce and make their own goat cheeses, specialty jams and jellies and more.