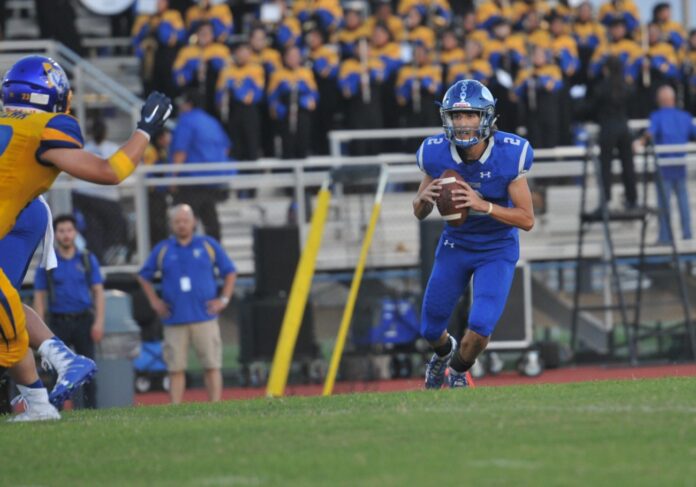 PORT ISABEL — Last year, Port Isabel did not get off to an ideal start, dropping the first two games of the season.

The Tarpons were not about to let history repeat itself this year.

The Tarpons shook off a shaky start and leaned on the legs of Mac Strunk and Brayan Medina, who provided Big Blue with the fuel they needed to earn a 37-16 win Friday night.

Medina made his 2019 debut on Friday night. Medina was held out all of camp with an injury.

“I think once Brayan got going we settled down,” Jason Strunk said. “That was his first action of the year, he didn’t scrimmage, so to see him back there was great and he did a good job on shaking off the rust.”

Port Isabel fumbled on two possessions during the first quarter. After a 27-yard field goal from Angel Fernandez, the Tarpons received the big play they needed.

“I’m not happy with the penalties we had in the fourth quarter, and if we are able to clean those things up we will be OK,” Jason Strunk said. “We want to be playing December football. That is why I came here. We have a lot of work to do. We will enjoy the win and get better.

The big plays became contagious on the ground. Mac Strunk worked out of the wildcat and caused problems all night for the Tigers’ defense.

Mac Strunk broke lose for a 51-yard score that pushed P.I.’s lead to 17-3 with 3:34 left in the first half. Medina later added a 12-yard score that gave the Tarpons a comfortable 24-3 at halftime. Port Isabel’s offense controlled the second half by adding a pair of touchdowns.

“We call it the Money Cat position, and it worked last week and it worked tonight,” Jason Strunk said. “(Mac) is a track kid, and he has the speed to get outside. He has always played defense and this year is his first year playing offense, and he has done a great job on learning on the fly.”

The Tarpons’ defense also shined after giving up 34 points in a 34-7 loss last year to the Tigers.

kThe Tarpons take on the Hidalgo Pirates next week on the road.