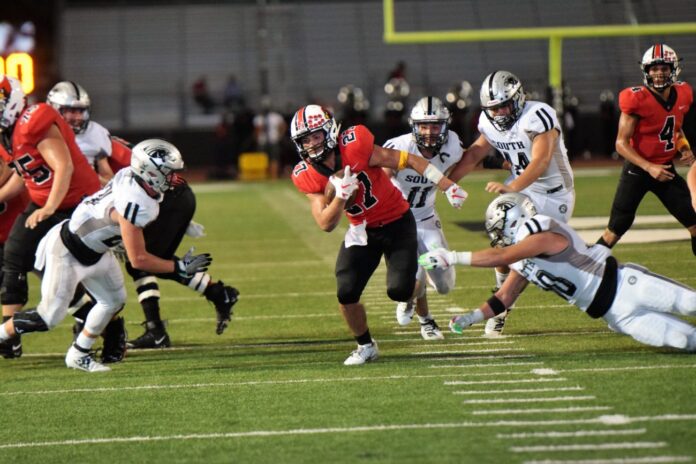 HARLINGEN — In what was shaping up to be a blow out, Harlingen High let a 21 point lead slip away in the third quarter. It was the final two drives fueled by a 32-yard field goal from Jacob Garza and a 2-yard touchdown from Rayden Berry that helped put Laredo United South away 38-26 Thursday night in the Valley Morning Stars Game of The Week.

“The special teams made a play on that kickoff and we were able to recover a fumble,” said Harlingen coach Manny Gomez. “I think the special teams helped us but the bottom line is, it was great to see the team come together and compete. We gave up some points and we are learning as we go and we are still evolving, only time will tell but I’m proud of the kids and my coaching staff.”

Berry’s power and conditioning showed up in the fourth quarter. Harlingen led 31-20 with 9:53 left, then came the two biggest runs of the night came on third and 18 and fourth and two. Berry took the hand off and ran for 16 yards and on the next play, Berry found the endzone for his third score of the night and helped put the game on ice.

“I have to give credit to my offensive line and all the receivers on that play, we all worked as a unit,” Berry said. “I felt great all night, I run great because of my offensive line they are the ones that create the holes.”

Harlingen’s offense shook off a fumble from Jaime Galvan on the first play from scrimmage and scored on four of their five possessions in the first half, while the defense stifled the Panthers after giving up an early touchdown.

On those four scoring drives, Galvan accounted for two of them with his legs and gave Harlingen a 14-7 lead late in the second quarter.

Galvan was elusive all night and had no problem handing off the ball to Berry, who added a pair of scores in the first half that gave Harlingen a 28-7 lead and reeled off 28 unanswered points.

“(Rayden) is a competitor, our offensive coordinator does a great job on watching what’s happening and with what the defense is giving us,” Gomez said. “The kids we have are competitors and the work they put in over the summer is all showing up.”

During the third quarter, Galvan missed a couple of drives due to an injury but was able to return and lead the Cardinals on their final two scoring drives in the fourth quarter.

“Jaime got a little banged up, but it’s football,” Gomez said. “We figured we could manage and he was itching there on the sideline and we put him in there and told him to go out there and compete and he went out there and helped us get this win.”

The Cardinals have now scored 35 points or more through the first two weeks of the season and will now shift their focus to arguably their toughest task in Converse Judson. The Cardinals were scheduled to host the Rockets last season but inclement weather forced the game to be cancelled. Kickoff is slated for next Friday at 7:30 p.m. at Converse Judson.