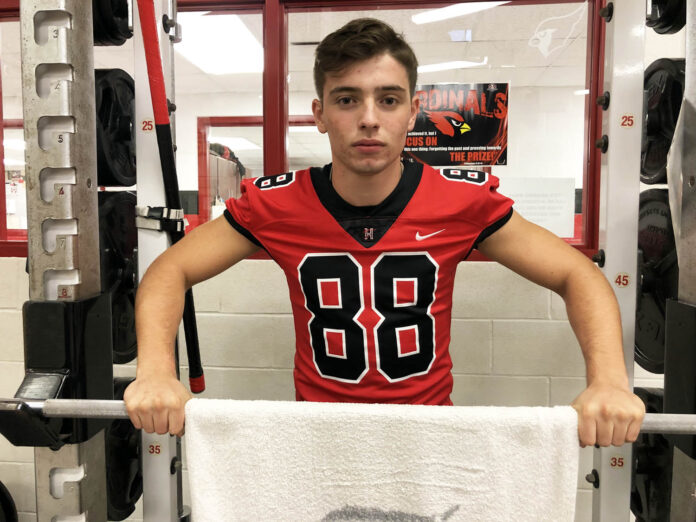 HARLINGEN — Seventeen-year-old senior Andrea Costanzi is no stranger to the game of football nor the United States. Costanzi’s road to Harlingen High was not a difficult one, but one he does not regret and has found himself a home in South Texas.

Costanzi has played football in New York, Alabama and even Florida, but never in Texas. Costanzi is an only child and is from Florence, Italy, and made the move to Texas on Aug. 8, when he was greeted by his future teammates and coach Manny Gomez along with other members of the coaching staff.

“Honestly, I only see him at practice but I know the kids love him,” Gomez said. “He gets along with them well. On the first day when he got here, I told the kids to imagine jumping on a plane and flying 11 hours to a place where you don’t know anyone. We wanted to make him feel at home, which I think has made him feel comfortable for sure.”

“I’m here as a rotary exchange student, and I came here for school and football,” Costanzi said. “I heard about the Harlingen Cardinals and I looked them up on Facebook, and heard a lot of great things and I liked what I saw. Here I liked the food, but I like it better in Italy.

Making the move was tough at first for Costanzi, but throughout the course of summer and through football he found his home in Harlingen.

“I was nervous when I first moved here because I left my family, and here I don’t have any family. It is just me. On the first day when I laid in bed alone, I just thought to myself, ‘Why am I here?’ but now that I’m here I have found a lot of friends and a lot of really good people that want me here. I found a family.” Costanzi said.

Costanzi has adjusted to the different lifestyles in Texas, attending a bigger school and in the classroom.

Costanzi got a taste of Friday night this past week at Sharyland Pioneer. On Thursday, Costanzi will make his home debut when the Cardinals play host  to Laredo United South.

His teammates have spoken to him about the Bird Bowl and the Battle of the Arroyo, and just how big those games are each year.

“In Italy we would have maybe 200 to 300 people in the stands, and it is much different here. The game is more serious and much more physical for sure. For me, to see the big crowd we had Friday I was blown away, and I’m excited to see what the rest of the games are like.”

On the field, Costanzi is a polished wide receiver and has started to build a chemistry with senior QB Jaime Galvan. Costanzi, who is a smooth route runner and has big-play ability, is looking to complement fellow wideout Justin Galvan.

“It has been a slow transition, but football is football,” Gomez said. “A lot of it has to do with the verbiage. A slant is a slant but sometimes those things are called something different, and he has had to learn a whole new system and another language when it comes to football. On the field he does a great job on catching the ball, he uses his hands well and is explosive. He is just a kid who is enjoying his stay here in the states and playing football in Texas.”

Once high school is over, Costanzi plans to play college football and receive a scholarship.

“I want to try and get a scholarship and go to college and play football, those are my goals while I’m here. Right now I’m just enjoying myself and playing football.” Costanzi said.