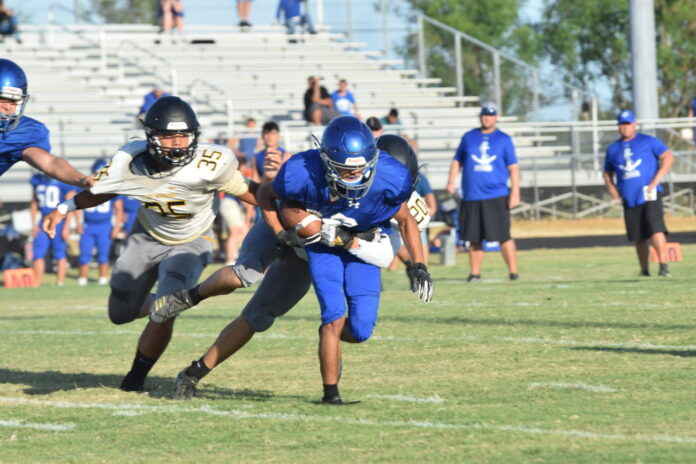 SANTA ROSA —Both Port Isabel and Santa Rosa used their final scrimmage as a dress rehearsal with the regular season just one week away. The Tarpons, who are under second-year head coach Jason Strunk, showed growth and a more familiar grasp of the system.

The Tarpons will open the season next Friday against the Porter Cowboys at Sams Memorial Stadium.

“We don’t come out and get ready to win a scrimmage, we want to come out here and get ready to run some stuff we run and get better,” Strunk said. “We ran some things tonight that we felt we needed to get better at with certain situations. This was all just preparing for next week; that was basically it.”

Heading into the season, the Tarpons will roll with junior quarterback Joey Krieghbaum. The junior started all three drives in the live portion of the scrimmage and directed the offense to a pair of touchdowns.

“Joey is our guy at quarterback,” Strunk said. “Our backup QB is our starting inside linebacker and he does a great job for us. Joey is the guy we are going with.”

The Tarpon running backs showed plenty of promise and could be a strong unit for the Tarpon offense with Joey Alvarado, Adrian Nino and Jordan Camacho.“We are going to be running the ball and our running backs looked really good tonight,” Strunk said. “We are going to be running a lot of no huddle stuff and RPOs; we haven’t run any of that yet. We are saving that for the season, but our backs are a big deal for us.”

One concern for the Tarpons was the slow start on offense. In the live portion, the Tarpons fumbled their first possession but were able to regroup and score on their final two drives.

Heading into camp there were a few questions for Santa Rosa head coach Hector Ayala and his club. The elephant in the room was who will replace last year’s star running back Ryan Mesa?

Well, the Warriors seem to have put that question away with Jose Diaz-Mendez, who displayed his speed and smooth running Thursday night, helping move the chains on more than one occasion.

“He is a good runner and he can make some cuts,” Ayala said of Diaz-Mendez. “He doesn’t make as many cuts but he is just a strong runner.”

Along with Diaz-Mendez was wide out Mike Bermea, who made multiple plays down field, showing the ability to make the 50/50 ball along with his speed that allows him to beat one on one matchups. While the skill positions are set, the looming question of who will be the starting quarterback remains in 2019. Both Resse Lara and Jose Ruiz split the live portion with two drives each. On Ruiz’s first drive, the Warriors marched inside the Tarpon 5 yard line, but eventually stalled. On his second drive, Ruiz directed a nine-play drive and hit Bermea for a touchdown.

Lara got some help from Diaz-Mendez, who broke off a big run that helped set up a TD pass to Bermea, capping of Lara’s first drive. On his second drive, Reese and the offense went threeand- out.

“It is still a battle for the QB position,” Ayala said. “Tonight, we saw it lean on way, then it would lean the other, but we will have to decide on someone. Both guys stepped up tonight and did their best and they are each others biggest supporters. They help each other out and are not negative, that is the good thing about it.”

The Warriors will kickoff their regular season next week at home against Lyford at 7:30 p.m