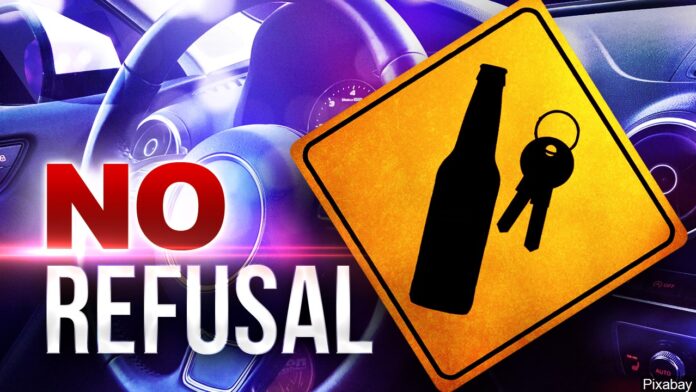 “Our lives have never been the same since that night,” she said, surrounded by dozens of law enforcement officials representing a span reaching from Starr County to Brownsville and everywhere in between.

Apolinar Rubio died that night, and so did a part of the Rubio family — a part that can never be brought back.

“We are a family of seven kids and now one of us is missing,” Alejandra Rubio said.

Apolinar Rubio never had a chance to see his child’s first steps or first day of school.

The law enforcement officials flanking Alejandra Rubio represent a “four-county stronghold” of officers who have a message for drunk and impaired drivers as the Labor Day holiday approaches.

“It’s a caustic choice to get behind the wheel if you’re intoxicated,” said Hidalgo County Sheriff J.E. “Eddie” Guerra. “It is simply not worth it.”

The fifth annual “No Refusal” weekend begins on Thursday, Aug. 29, and runs through Monday, Sept. 2.

Officers will not be taking no for an answer when it comes from suspected drunk drivers who refuse a breathalyzer or a blood draw.

Law enforcement will get a warrant.

And this year, in a first, Starr, Hidalgo, Cameron and Willacy counties will all be participating to create what Willacy County District Attorney Annette C. Hinojosa calls a “four-county stronghold.”

“There will be people watching and we will be taking care of the business we have to if you put yourself or others at risk,” said Hinojosa.

During a near hour-long press conference at the Pharr Events Center Thursday morning, district attorneys and law enforcement from all four counties were on hand and nearly everyone who spoke had a tragic story to tell that could have been prevented if people just didn’t drink and drive.

Hinojosa said Willacy County has had several serious fatalities in the last couple years, including one in the last six months.

She is referring to a May 16 accident on Business 77, south of Farm-to-Market Road 3168 in Raymondville where 26-year-old Dayna Louise Salinas is accused of causing a three-vehicle accident that left 19-year-old Jonathan Young dead and his son injured.

Starr County District Attorney Omar Escobar Jr. recalled one drive he’ll never forget when he came upon the scene of a drunken driving accident that left a mother and grandmother dead.

Just last week, Cameron County District Attorney Luis V. Saenz recalled sitting in an empty hallway in the courthouse talking to an anguished mother, looking into her eyes, and explaining the sentencing options in the case against a person who killed her child while drinking and driving.

When he told her, she asked, “Is that all that is going to happen?”

The officials on Thursday expressed how frustrating it can be spending so much time seeking justice for these acts when they are entirely preventable.

“This does not have to happen,” Rodriguez, the Hidalgo County DA said. “We can stop this from happening.”

But for Alejandra Rubio and her family, it’s too late.

“It’s never OK to drink and drive,” she said. “Let’s put a stop to the senseless crime and senseless loss of life.”