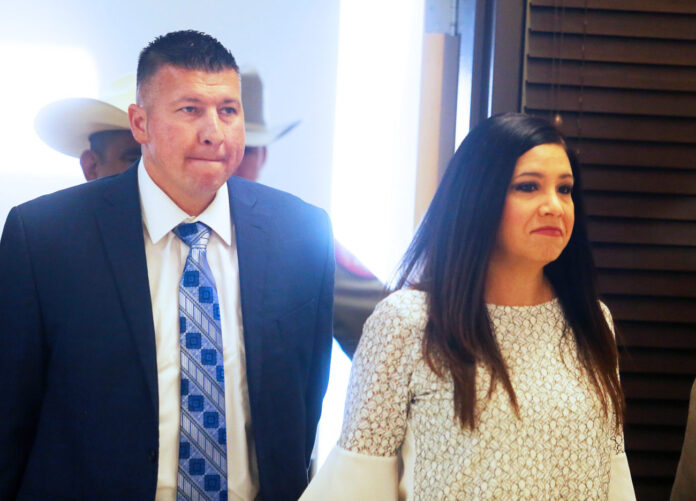 When a KRGV reporter reached out to interview Richard Molina in March 2018 about allegations of voter fraud, the mayor of Edinburg, who has since been indicted on illegal voting charges stemming from accusations that he rigged his 2017 municipal election, wasn’t receptive to the idea.

“Normally I wouldn’t have any issue with scheduling a sit-down interview with you to discuss a story,” Molina wrote in a March 27, 2018 email to KRGV reporter Michael Scott. “However, I have serious issues with your approach to this ‘investigation’ and the motive behind any potential news coverage.

“Neither I nor anyone in the City of Edinburg government have been contacted or questioned about any investigation of voter fraud or allegation of any wrongdoing. If someone did have a legitimate claim, the proper authorities would be investigating, not the media.”

Molina’s email, obtained by The Monitor through an open records request, is just one of several instances of his administration dismissing or intimidating journalists reporting on the voter fraud case in which he’s now embroiled.

City spokesperson Cary Zayas blocked media’s cameras following an April 25 arraignment for Molina and his wife, Dalia Molina. Earlier that day, Zayas uttered “ridiculous” to KRGV reporter Valerie Gonzalez seconds after attempting to question Molina as he was walking into the Texas Department of Public Safety in Edinburg to turn himself in.

Though Zayas was reprimanded for unprofessional behavior and antagonizing journalists, the city never addressed a potential conflict of interest given that Zayas’ sister, Robin Zayas, was named in a complaint as the deputy registrar who registered one of the illegal voting suspects arrested in the case.

Another example of the city’s contentious relationship with the press came a day before his first arraignment, when Molina cut short an interview with KGBT’s Marybel Gonzalez in which the reporter said he agreed to talk about voter fraud allegations. A woman was caught on a hot mic saying, “she’s here for his arrest and no one was supposed to know about it.”

In last year’s email to KRGV, Molina took issue with the station’s inquiry, claiming it stemmed from a “political attack” and accused the news station of being complicit in a “well-orchestrated political plan” perpetrated by his “outspoken critic, affiliated with the former administration” — former Precinct 4 Justice of the Peace Mary Alice Palacios.

“I’m sure you have the complaint she filed from the Secretary of State’s office,” he wrote. “Mary Alice Palacios filed these fraudulent claims only after her own insurance contract with the city was terminated,” adding her claims were “political retaliation, not fraud.”

Molina even attempted to discredit Scott personally, accusing him of “associating with (Palacios) socially,” and claimed he had knowledge about a gift in the form of a gym membership.

KRGV said these claims have “no merit,” and they disclose any conflicts.

And like Molina, KRGV questioned Palacios’ motives, so they conducted their own research obtaining more than 1,200 voter change of address forms, the station’s news director, Jenny Martinez, said.

“We made a commitment we would investigate any question about Palacios, should a question arise before we tackled the Molina investigation,” she said. “We found no evidence of willful intention to commit voter fraud.

“We also looked at complaints about former Hidalgo County Commissioner Joseph Palacios and others.”

Molina’s emailed mentioned 409 E. Fay St. Eleven people were registered to vote in this one-bedroom home, according to KRGV’s corroborative reporting on April 26, 2018.

“You have spent weeks knocking on the same doors over and over, harassing people, trying to get someone to give you a sound bite that will fit into a story you’ve already written,” Molina wrote.

But Martinez describes a hunt: two reporters combing through hundreds of documents sprawled across a conference table looking for anything out of place.

“We chose a few that looked unusual,” Martinez said. “Then we went to the various locations to see the circumstances for ourselves.

“Much of the information we obtained came from the community. That’s how the investigation unfolded.”

Palacios’ research was sent to local media outlets, including The Monitor. But allegations of voter fraud expanded beyond her initial claims.

Although Molina claimed Scott’s reporting “doesn’t live up to real journalism or a true investigation,” 19 people have since been arrested in connection with the case, including the mayor and his wife.

In a criminal complaint, one “co-conspirator witness” told investigators about a conversation with Molina in which the mayor said he “was going to use a strategy of changing people’s voter registration addresses to addresses located inside the city limits of Edinburg, Texas at residences where people did not actually reside in an effort to increase the number of voters.”

The Monitor filed a public information request for all electronic communications between Molina, Zayas, city attorney Omar Ochoa and city manager Juan Guerra going back to November 2017 about the case or potential conflicts of interest.

Edinburg is requesting an Attorney General’s opinion on a portion of documents citing Section 552.107 of the Texas Government Code, which states: “Information that the attorney general or an attorney of a political subdivision is prohibited from disclosing because of a duty to the client under the Texas Rules of Evidence or the Texas Disciplinary Rules of Professional Conduct.”

Ochoa said documents sent to the AG are not related to any investigation. Rather, they are legal communications containing keywords included in the request. Molina did not respond to requests for comment.