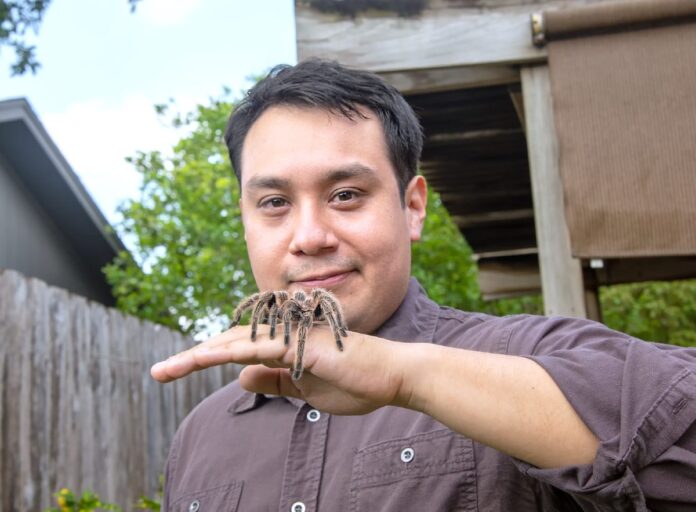 HARLINGEN – Tae Kwon Do Master Instructor Rick Ramirez has practiced martial arts most of his life.

The 32-year-old Harlingen native, who has his own Tae Kwon Do academy in San Benito, has 24 years of experience under his belt – or rather, under his fourth degree black belt.

He is even a published author on the subject, having written a book that connects life lessons with the martial arts.

But ask any guest to his home about what stands out about Ramirez, and they’ll likely point out his vast collection of exotic tarantulas.

“Many are interested and want to hold them,” Ramirez said about his guests’ reactions to his tarantulas. “Many don’t even want to see or know about their existence.”

Ramirez keeps an impressive display of the hairy spiders on the breakfast bar of his kitchen, all in different glass containers intricately decorated with small logs and plants.

“I believe they are fascinating creatures because they look like ancient animals when you look at them in detail – their mouthparts, joints, spinnerets,” he said.

His impressive tarantula collection includes several species from other countries, like the Indian Ornamental Tarantula, the Brazilian Black Tarantula, the Chilean Rose Tarantula and the Antillies Pinktoe Tarantula to name a few.

Ramirez’s fascination with tarantulas began during his years as a graduate student at The University of Texas Pan American (now UTRGV).

“I chose to work with tarantulas for my master’s degree project because they seemed so different and would make a great learning experience for me,” he said. “My experiment was to figure out if the addition of UV radiation had an effect on the feeding behavior of the tarantulas that are native to the RGV.”

After receiving his master’s degree in biology in 2015, Ramirez is now a science teacher at Benito High School.

Whenever possible, he incorporates tarantulas as part of his lessons.

“I use them as my teaching tools,” Ramirez said. “Most of my students are intrigued by them and want to hold them at their desks.”