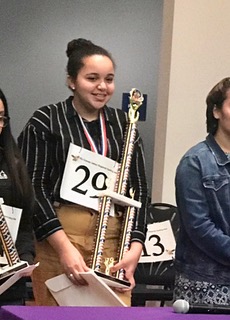 HARLINGEN – Isabella Jackson is no stranger to the pressures of being onstage during a spelling bee competition, anxiously waiting for the pronouncer to say a word she will then meticulously repeat and carefully spell.

“Don’t be afraid to get out there and do it. You never know what could happen,” Isabella said, describing her experience during competition. “Don’t be intimidated by everyone staring or the judges because the judges usually turn out to be really nice people. Don’t get intimidated by them, that’s just getting yourself worked up for nothing.”

The 14-year-old student from Moises Vela Middle School is on her way to Washington D.C. this morning as the AIM Media Texas Regional Champion Speller representing the Rio Grande Valley in the 2019 Scripps National Spelling Bee competition, which starts tomorrow through Thursday.

AIM Media Texas is sponsoring Isabella’s trip, along with a chaperone.

Isabella first competed in a spelling bee back in 2012, when she was in third grade.

“We had our little classroom spelling bee, and the champion would go on to the school-wide spelling bee,” she said.

Now, as school, district and regional spelling bee champion, Isabella will compete against more than 550 spellers from all 50 states, several U.S. territories and countries like the Bahamas, Canada, Ghana, Jamaica, Japan and South Korea.

Besides her skillful spelling tactics, Isabella’s journey to the national spelling had a lot to do with the encouragement from her family and the help from her coach, Monica Ibarra.

“I didn’t think I would make it this far, but I’m really excited to go,” she said. “I’m very appreciative of my family. They’ve been really supportive, and my coach has really helped me get through all this process.”

This is also Isabella’s first visit to the nation’s capital, and she’s looking forward to the experience.

RSVBee is an invitational program launched by Scripps National Spelling Bee to provide an opportunity for more spellers to participate in the National Finals in Washington, D.C.

The invitational program provides an additional path for students to experience Bee Week and compete in the National Finals.

The program has a $1,500 participation fee. Students must also arrange transportation to and from Bee Week, as well as lodging at competition’s hotel.