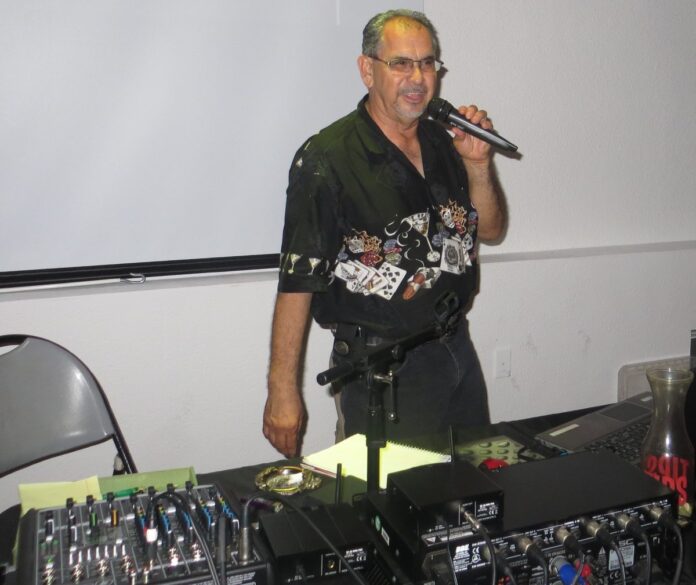 SAN BENITO — Jose Ramon Palacios has one goal in mind when he takes the DJ booth during Wednesday Oldies at Oak Hill Event Center — to make sure all the guests have a good time.

Palacios, who goes by the stage name DJ GTO, likes to see people get up and dance or simply kick-back and enjoy the sounds of classic rock, country-western and Tejano.

Palacios describes himself as a music hobbyist, a hobby that began long ago when he played the cornet for the Harlingen High School Cardinal Marching Band up to his graduation in 1971.

He also plays the guitar.

As a DJ, Palacios believes the golden era of American popular music happened during the late 50s, throughout the 60s and into the 70s.

“It is the greatest music ever created that has stood the test of time,” he said. “Whether you call it bubblegum, rhythm and blues or simply rock ‘n’ roll, you will hear it played at Wednesday Oldies.”

The idea of hosting Wednesday Oldies began 27 years ago, according to Palacios.

Along with his wife Yolanda, Palacios purchased the old house on the hill and surrounding acres at 1780 W. Expressway 83 in San Benito in 1992 and began creating a business plan for a semi-outdoor venue for private events.

The plan became a reality in 2010, when the couple opened Oak Hill Event Center.

Besides hosting weddings, quinceañeras and other parties, the couple welcomes people Wednesdays at 7 p.m. for the free event, which Palacios describes as the only place in the Valley to enjoy old time music.

“I ask my guests what they want to hear, and many times they give me a song I had forgotten or never heard. My collection of the greatest hits ever just keeps growing,” he said. “We want everyone to dance. My wife and I are both over 65, and this night is our fun-exercise night. We’ve been dancing continuously since teenagers. What better exercise than dancing in the fresh air?”