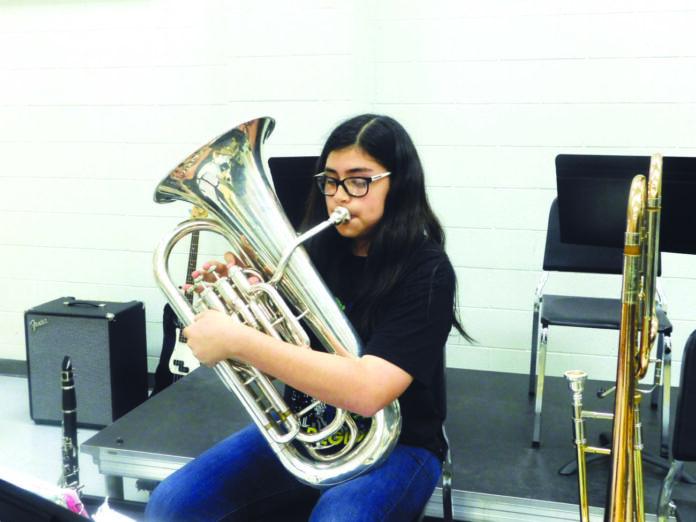 HARLINGEN — It started with the baritone.

“I liked the sound of it, and also I enjoy music,” said Jacqueline Davis, 13.

That was three years ago when Jacqueline, then in sixth grade, began to flex her musical talents. The Vela Middle School eighth grader now plays three more instruments: bassoon, trombone and clarinet.

“I like the challenge,” she said softly in the band hall surrounded by her instruments.

About halfway through her sixth grade year she took up the bassoon.

“I wanted to play it because it’s a specialty instrument,” she said. “I am the only eighth grader that plays it. Not a lot of people play it.”

“There are, I would say, more buttons than any other instrument,” she said.Last year she took up the trombone, which she now plays in the school’s Jazz Band One. While she loves jazz, mastering the trombone presented its particular challenges with all the sliding back and forth.

Ultimately, however, she prefers jazz band to concert band with the other instruments. She still conveyed a love for concert band when she took up the clarinet just this year.

“I wanted to be more involved in the band,” she said. “I wanted to play in the sub varsity band. I was able to start playing it with my other friends.”

Her teachers couldn’t be more pleased.

“She’s very committed and she has parents that support her,” she said.

“We’re always thankful for students who are willing to put in that kind of effort.”

Spreading oneself out to so many instruments might lessen a musician’s expertise in any one instrument, but Uribe said Jacqueline’s expansion was carefully measured.

“They have to start with one and excel in that instrument first,” she said.Jacqueline has a fine start in a musical life which she plans to continue.

“I would like to continue into high school,” she said. “In college I would at least want to get a minor in music.”