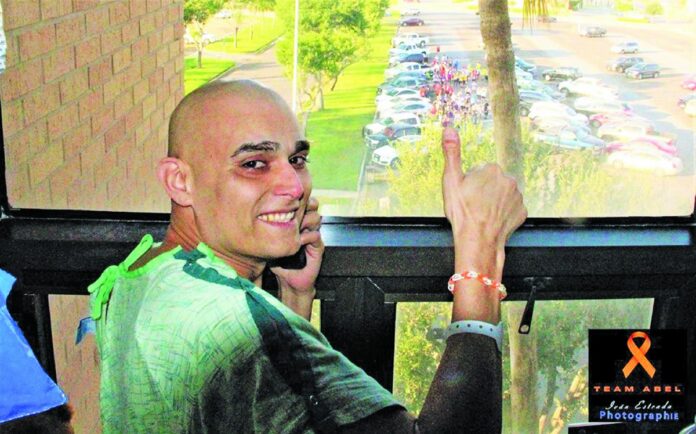 HARLINGEN — Abel Fonseca’s sadness was evident as he gazed out of his window on the 17th floor of MD Anderson Cancer Center in Houston.

He was looking for a sign of hope as he thought about his family, and wishing for a miracle.

He was at the crossroads to recovery.

His recent bone marrow transplant had given him pain and side effects, but he was looking forward to being released from the hospital.

Abel, 40, a San Benito resident, was hundreds of miles away from home, and had shed many tears during his battle with cancer.

He yearned to be home.

To forget about the heartbreak and the pain of being alone, one night he began surfing the Internet and scrolling through Facebook on his phone. Then he landed on a web page asking visitors to buy a T-shirt for a chance to win $100,000.

Abel said he began thumbing through the pages looking at the merchandise and swiping past products until he zoomed in on his screen to get a closer look at a shirt he liked, and considered buying.

The thought of $100,000 in the bank sounded great and could supercharge his fight against leukemia.

Out of work and an ongoing pile of medical bills stacking up also worried him as he fought his cancer.

Able was released from the hospital on Friday, but he is not out of the woods yet, even though his doctors are telling him he was reborn.

He will be staying in Houston until April so doctors can monitor his new blood and stem cells he received from his brother, Tyler, that were funneled into his body through his heart.

“His cells are taking over,” Abel said.

The transplant began in mid-January.

“I try to get better, I try,” Abel said about following doctors’ orders. “They tell me to take these medications and I take it. They tell me to walk, and I walk.”

He said he tries to do everything they tell him to do so he can go home.

“I have a little bit more time here, just a little bit,” he said, referring to the two months of daily doctor visits he will have to endure before heading back home to San Benito.

His brother, a captain in the Army, was granted permission to leave his post to donate his cells to Abel.

“He went through some pains, too, because they had to take his white blood cells from his bones,” Abel said.

Doctors tell Abel he is reborn because his O-negative blood type will change in 30 to 60 days into his A-positive because of the transfusion of cells.

Back to the T-shirt.

Days after finally buying into the chance to win $100,000 and after his transplant, Abel received a call from Diesel Dave, of TV’s The Diesel Brothers fame.

He took the call and was asked if he knew who the person calling him was. Dave asked him if he had ordered a T-shirt, and something else?

Abel couldn’t recall, as Dave continued to try to surprise him. Then Abel told him he was in the hospital recovering from surgery and fighting cancer.

Dave’s attitude quickly changed. He was now interested in knowing more about Abel’s fight with cancer.

The call was live on Facebook and Dave listened carefully to learn all that Abel was going through.

Dave’s response to Abel was, “Your teaching cancer a lesson.”

And then he surprised Abel with the news he was the winner of the $100,000 give-away contest.

They both were in tears at the thought that the prize could not have gone to a better, more deserving and in need person.

Out of the thousands who had entered the big-bucks contest offered by the TV personality, it was a cancer patient battling bills and being away from his family who had won the prize.

“We had a blast with the Diesel Brothers,” Abel said.

A few weeks after the call, the Diesel Brothers arrived at Abel’s hospital room offering Monster Jam tickets. The next day the Diesel brother took his son to the Monster Jam.

“My son really enjoyed it,” Abel said. “Diesel Dave hung out with him all day and they took him down to see the monster trucks and bought him stuff.”

Abel posted part of his experience with the Diesel Brothers on Facebook.

“We were here just talking,” Abel said. “They are great guys.”

The Diesel Brothers have a reality TV show on the Discovery channel about driving big trucks.

“All the paperwork is signed and we are waiting for the money,” Abel said. “I am beyond blessed,”

He said he had recently discussed selling the family home and moving into something smaller with his wife.

“It wasn’t going to hurt us,” Abel said.

But they waited and their faith brought them a blessing.

“All I did was purchase a shirt,” Abel said. “I wasn’t going to buy anything.”

He said he thought to himself, “Me, winning $100 grand. That is not going to happen.

“I was just going to waste money,” Abel recalled of the night surfing the page of merchandise.

“That is amazing that, that’s all it took,” Abel said. “It’s going to help, especially with the doctor bills.”

A Gofundme account has also been set up to help the family.

“Anything still helps,” Abel said. “That $100 grand is going to go real fast with these doctor bills.”

Abel said he is adjusting after surgery and expects to come home to get back to work and the boxing gym.

He’s looking forward to going back to work at the after-school program he leads at Miller Jordan Middle School.

“I just want to go home,” Abel said. “I told God I will never complain about anything ever again I promise, I promise.”

Abel said he sees life differently since being diagnosed with leukemia and beginning his fight to stay alive.