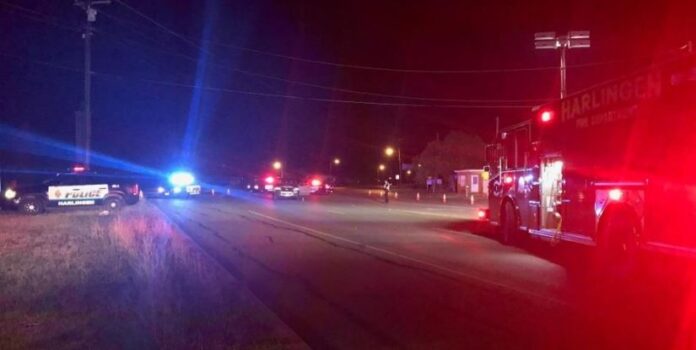 HARLINGEN — Police reported the three victims who were struck by a motor vehicle while crossing 77 Sunshine Strip Tuesday night are hospitalized in stable condition.

Police reported no citations have been issued since the crash.

The crash is still under investigation by the Harlingen Police Department Highway Enforcement Unit.

The driver of the vehicle stayed at the scene and rendered aid, according to Angel Alcala, a relative who posted an update about the incident on Facebook.

Alcala said the victims are her two nieces and brother-in-law.

It is not clear if the man is the father of the two girls.

Alcala said her young relatives involved in the incident are 12 years old and 4 years old.

According to Alcala, the 4-year-old has a bruised lung and fractured pelvis.

The 12-year-old suffered from cuts, scrapes and may have muscle spasm to her back.

She said her brother-in-law has a fractured back.

Harlingen police responded to the auto/pedestrian crash at the intersection of North Commerce Street and 77 Sunshine Strip.

According to a release, officers arrived on scene and found three pedestrians had been struck by a vehicle.

Police said the vehicle was traveling southbound on 77 Sunshine Strip when the pedestrians attempted to cross 77 traveling westbound.

All three victims were transported by EMS to a local hospital for treatment.