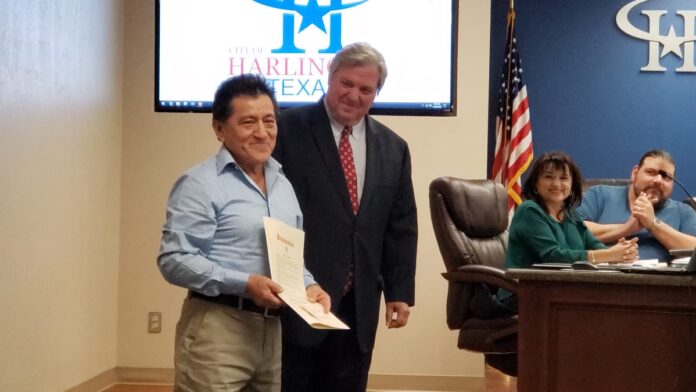 And Santos Cantu knows that now.

The Harlingen City Commission declared Nov. 26, 2018, Santos Cantu Day in recognition of his 36.5 years of dedicated service to the community.

Mayor Chris Boswell presented him with a proclamation during a Nov. 26 special City Commission meeting.

Boswell read the proclamation written for Cantu’s service to the city and for going above and beyond his duties throughout his career as a Harlingen city employee.

“He has given unselfishly and technical expertise to the dedication of the city,” Boswell said.

Cantu started his work with the city as a laborer in the parks department in 1979.

He later transferred to the Sanitation Department as a brush and debris equipment operator in 1982.

The mayor noted Cantu’s service to the city was exemplary and worthy of a special notice and wished him a happy retirement.

“Mr. Cantu has been known as a great team player and would go above and beyond what was expected of him,” Boswell said. “Mr. Cantu is leaving the city for a new adventure and his smiling and friendly face will be missed by all.”

Cantu was at a loss for words, but said he enjoyed working for the city and was honored the city designated a day in his honor.