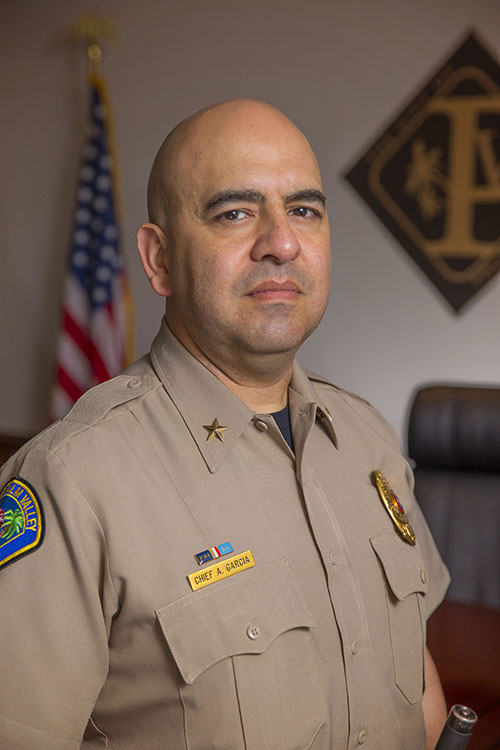 PALM VALLEY — Police Chief Alvaro Garcia was arrested Tuesday morning and charged with three counts of tampering with government records, according to officials with the Cameron County District Attorney’s Office.

Garcia was not available for comment and did not return phone calls left for him at Palm Valley City Hall and the Police Department.

Garcia was arrested after an investigation was made by the Texas Commission on Law Enforcement, the Texas Rangers and DA’s Special Investigations Unit.

Because the case is pending, authorities declined to offer any further information on Garcia’s arrest.

His arrest come months after Garcia was suspended in May and put on administrative leave for 18 days.

At the time, his attorney John Blaylock said the suspension followed a complaint generally stating the chief “plays favorites with some officers over others.”

Texas Rangers originally investigated a complaint against Garcia from another officer.

The issue appeared to have revolved around pay for taking online classes, which is not uncommon in police departments.

Garcia has held positions with TCOLE officer training since 1998.

However, Palm Valley Mayor George Rivera said the details on Garcia’s recent arrest are still not clear, or whether it is related to the previous incident that led to Garcia’s suspension last summer.

“We are still trying to gather information from the arresting authorities,” Rivera said. “In the mean time the chief is on personal leave with his family.”

Rivera said the second in command will take over scheduling and will continue to assure the safety and security of residents, guests and properties.

“As of right now there are no decisions until we know what is going on and why,” Rivera said about Garcia’s status as chief. “It is unfortunate that our police chief got arrested.”