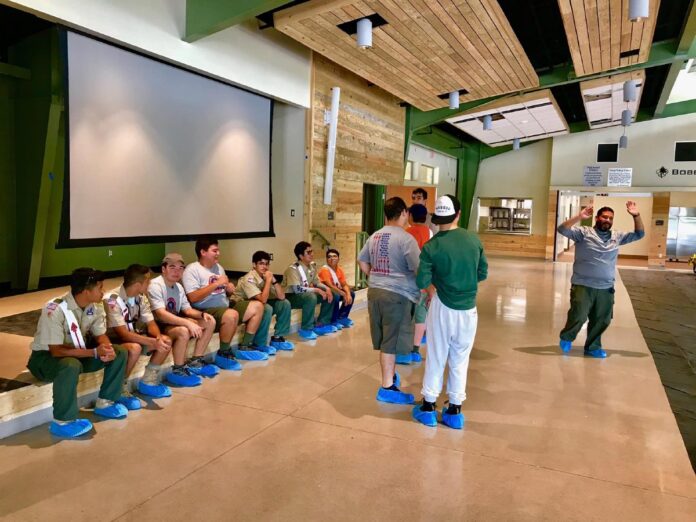 He and many Boy Scout leaders were celebrating the grand opening of the Ponce Duran Family Dining Hall at Camp Perry Tuesday night.

The song was “On Top of Camp Perry.”

It’s about a scout who writes a letter home to his mother stating he wants to go home, but instead changes his mind to enjoy the camp and the new dining hall.

It was not a traditional camp fire. Boswell had everyone singing along with him inside the dining hall, not around an evening camp fire.

The song was dedicated to the Edinburg Eagle Scout Ponce Duran.

Duran was an advisor to the “Adelante con Camp Perry!” capital campaign to revitalize the nearly 100-year-old camp ground scouts have been using for generations.

“I am proud to say we are leaving this camp better than we found it,” Duran said to the guests at Tuesday night’s celebration.

The grand opening of the dining hall is part of the first phase of an $8.1 million revitalization project for the oldest operating Boy Scout camp in Texas.

More than 100 people from around the Valley were in attendance, including scouts, scout leaders, philanthropists and members of the community who support scouting.

Boswell was dressed in his scouting uniform as he addressed the guests at Camp Perry on the momentous occasion.

Boswell is one of the dozens of Eagle Scouts spanning three to four generations to have earned badges at the camp growing up.

The Rio Grande Council’s goal was to reach $6.1 million and within a year’s time of launching the revitalization campaign to expand the camp, the more than 600 interested citizens and ex-scouts surpassed their goal by $2 million.

Boswell said this campaign has been one of his most rewarding experiences he has had as a scout.

For more than 90 years Camp Charles F. Perry has provided fun and adventure for the youth of the Rio Grande Valley and scouts far and wide.

“We are changing lives here at Camp Perry,” said Rudy Gonzalez, Rio Grande Council executive director. “And we are preparing the youths for life.”

Gonzalez retold the story about a scout who dreamed of flying to the stars when he looked up in the night sky from Camp Perry.

Mike Fossum became an astronaut years after he earned his Eagle Scout badge in the Valley. Fossum became the commander of the International Space Station.

The second phase of development at Camp Perry will include new retreat cabins, a swimming pool and parking lot and will begin next year.

But all the adventure won’t just be for the scouts.

Gonzalez said the plan is to open up Camp Perry to other nonprofits and school districts and provide rentals to the public for gatherings.

“We are making history,” Gonzalez said. “Something like this won’t happen again for another 100 years.”

The following are some of the specs for the Camp Perry Dining Hall: