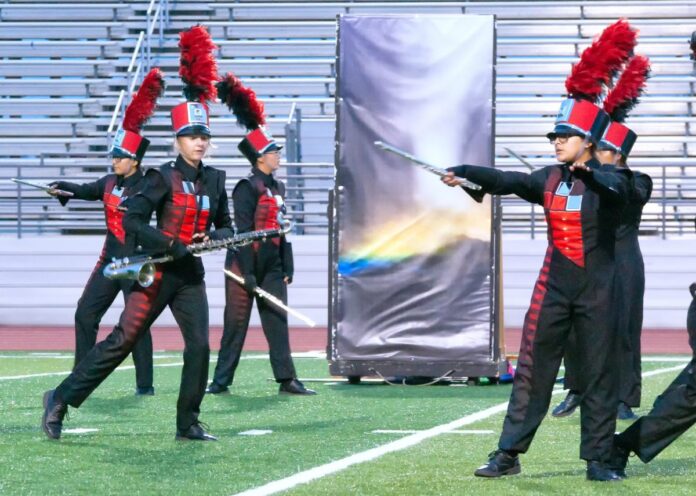 HARLINGEN — They’ve done it again — for the 11th time.

“I feel ecstatic,” said Bianca Lopez, 17, a senior who sings and plays synthesizer.

“It’s an honor to be able to compete with some of the best bands out there in Texas,” she said. “We worked really hard for it so I definitely think we’ve earned it.”

HHS earned superior ratings Oct. 20 at the 76th Pigskin Jubilee UIL Marching Band Contest in Weslaco. This past Saturday they competed in the Area G competition in Laredo.

A total of 26 bands competed. In the first round, 10 bands were selected. There was a sort of ironic twist for HHS and Harlingen High School South.

“Harlingen High School got in by the hair of their chinny chin chin, but they got in,” Rios said. “At the finals they came in fifth and South ended up sixth so they did not advance.”

The band has persistently worked after every competition to get even better, said Maria Coronado, band director at HHS.

“Every Monday we came with the mindset of making changes so we could improve,” she said. “What would be the best way to improve our performance? We would continue to make those corrections and those sixes and tweaks.”

Sixes refer to changes in the visual design of the show.

“If we needed to make the performance of the music or the drill design better we would make sixes in order to make it better,” she said.

Paula Camacho, 16, was looking forward to the state meet Monday at the Alamodome.

“It’s been a challenge and we’ve been working really hard,” said Paula, a member of the colorguard. “I am nervous but I know that we can do it and we will do it.”

“It really is pretty simple,” he said. “Harlingen High had a really good finals performance and we slipped a little bit in finals. We didn’t have our best foot forward so to speak. I take responsibility for not motivating the kids enough to be ready for their most important performance of the season. We had as high as first place in marching. One judge had us as the best marchers. We were as high as fourth place in playing. But two judges just didn’t care of ur all day and they knocked us out. It’s a life lesson. Things don’t always go your way, and what matters is that you just get back up and keep going.”