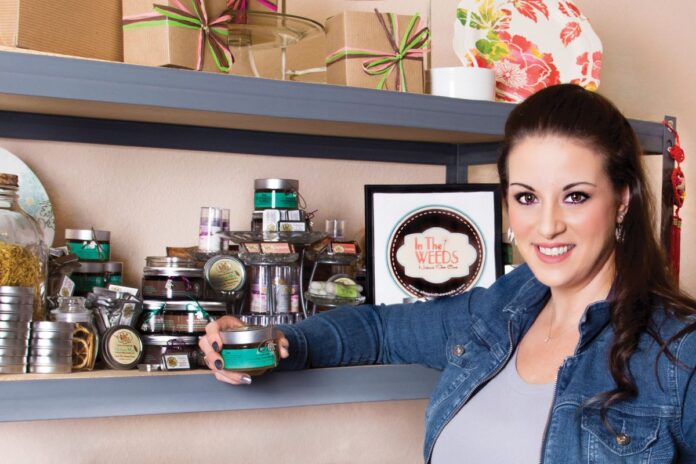 McALLEN — Lika Torline has a reminder for others, always use moisturizer.

“When you put lotions and toners onto your skin, they only take 28 seconds for the product to be absorbed into your body,” she says.

As owner and founder of In The Weeds cosmetic line, obstacles are not a deterrent from making it to the big leagues for the 35-year-old McAllen native, who set very high goals for herself thanks to her parents and their dedication to enduring said obstacles.

After much hardship and struggle early in her career, Torline is now a certified esthetician whose cosmetic line, In The Weeds, is a natural skincare line based out of her home-office in San Antonio.

As for now, her business runs online and wholesale, but she is on her way to making it more accessible as the line will soon be in a big box store.

A 2001 graduate of McAllen Memorial High School, beauty has always been number one in her book, and like any other teenager girl, a makeup set was constantly in her bag.

While Torline was still in high school, she would speak of her beauty skills as a hobby to friends and classmates, conducting makeup sessions for special occasions such as quinceañeras and weddings.

After graduating high school, she attended South Texas College and the University of Texas-Pan American (now UTRGV), where she took the college basics. She eventually transferred to Texas State University in San Marcos in the spring 2005 and graduated in 2010 with a bachelor’s degree in interior design and a minor in technology.

After almost a decade of trying to earn a degree, the McAllen native returned home and began working at a local furniture store that fall. After working there for approximately six months, tragedy struck when she was just 28 years old.

Her life spiraled downwards as she was hurt on the job and later quit due to her injures, she said. During her time at home, she fought depression and felt as though her life was “in the weeds.” Although she still deals with the injury, hard work and self-motivation keeps her pushing forward.

In 2012, she decided to spread her creative wings once again, and little did she know that a door was about to open that would launch a new career as a young entrepreneur.

“Why don’t I just go to school and get certified to be an esthetician? I’m not doing anything else,” Torline recalls telling her mother one day.

Torline began researching the curriculum at Spa Professionals Academy in McAllen before starting her journey to become an esthetician, which is a health profession to help others with skincare issues.

“My initial intentions were to use my certification to become a makeup artist,” Torline said. “I’ve always had a background in the arts and I was good at makeup, so it seemed like a wise decision to get certified.”

She began esthetics school in May 2012.

During her time there, she created Dollface, an exfoliating mask and light moisturizer carrying an assortment of skincare benefits to combat acne, acne scars and sunspots, amongst other items. It has also become her most popular facial cream.

“After feeling pleased with my creation, I gave some to family and friends who just thought it was wonderful,” Torline said. “I began to get excited and wanted to make it better. I kept adding all natural components with different skin reactions and benefits. I was encouraged by my peers and esthetics teacher, Ms. Arguelles, to begin selling this product because people were attracted to the fact that it was all natural, handmade and fresh foods for your face.”

In fall 2012, Torline began selling at Alhambra in downtown McAllen and would also meet people at local bars around the area.

“I didn’t care for networking events,” she said. “I would go to Fast Eddie’s and talk to people when I was out with friends at a bar.”

One morning at a farmers market, Torline said she had profited $100 and recalled feeling exhilarated, given that she was more broke at the time than when she was in school.

She graduated from the esthetics school in the spring of 2013.

As she was about to venture on her own and trying to find success, her parents James and Rosalinda had mixed reactions.

“My mom asked me to get a job, but I didn’t want to lose money from this,” she said about following her dreams. “My dad was very supportive and just told me to go with it.”

Her first break in the business industry came in spring 2013 as she entered the McAllen Chamber of Commerce Innovation Grant Awards, where she became one of 10 applicants to win between $5,000 and $10,000.

She presented to seven judges by providing before and after photos of people using her product and four pages of testimonials. She eventually won a $5,000 grant for her product, Dollface, and with that money she secured her property rights and used some of the grant funds to build her website.

In 2014, she moved to San Antonio and hoped to further nurture her new

Torline still lives in San Antonio and has found success in her business. She has gained four employees besides herself, and in 2019 will have her own manufacturing space to increase production of her brand, In The Weeds.

Torline has also expanded her business to include items for both men and women, such as lip balm, body scrubs, facial products and candles.

She’s made it clear that she is against anything chemical-based.

“We don’t throw around the words ‘premium’ and ‘quality’ loosely. Anyone can make a bath product in their home,” she said about her business. “The difference between ours and theirs is that ours are made by a licensed esthetician specializing in holistic remedies for the skin, and each product we create is made after countless hours of research and experimentation.”

As Torline’s business continues growing, she is earning high marks for her work as well. In 2015, she was named “Best of the City” in Beauty & Cosmetics in San Antonio Magazine; she has also been a recipient of Westside Development Corporation’s Small Business Grant for 2016 and has since been making a name for herself in the industry.

Torline has made plenty of sacrifices along the way.

“I still have chronic back pain, some days worse than others, but I live with it,” she said. “This job keeps me active and I’m living to sell my product.”

Additionally, as a business woman, she wants to be a role model for the youth.