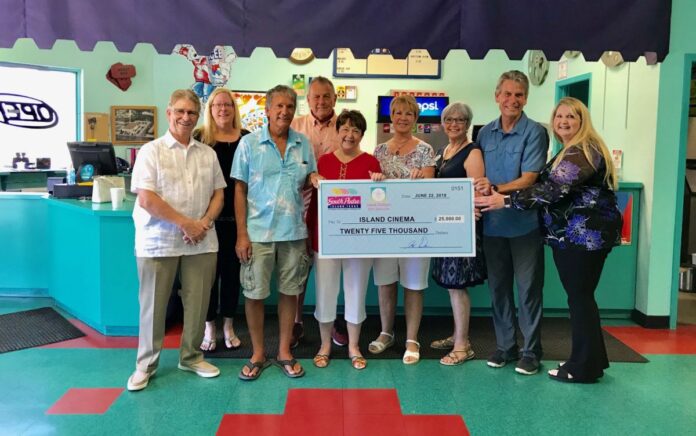 SOUTH PADRE ISLAND — After being awarded $25,000 in grant funding, you might see new seating in the local movie theater here sometime this fall.

“We have known that we’ve needed new seats for a long time,” Hayden said.

“And it just hasn’t fit into our budget. So, having this financial help was just wonderful and I think a lot of people in the community here are very excited, too, because they like to come here, but they don’t like our current seats very much and we understand that.”

“The screens are small and the seats are old. But everything seems well maintained and it is actually a lot of fun to go to a movie here,” McAllen resident Jerry J. wrote in a review he posted on Yelp last year.

New seating in the cinema will probably cost about $40,000 to $50,000. Hayden said all of the grant money will go toward seating and then between her and the business will have to come up with the rest of the money to get it done. But that’s what they’re doing.

The Island Cinema building was constructed in 1992. Hayden purchased the movie theater from the previous owner in 1996.

It has four movie screens and about 426 movie theater seats. However, the building does not have the height to effectively put in stadium seating. So it will still have a sloped floor, but they are looking for comfortable seats with arms that rise up.

Stadium seating is a seating arrangement that is commonly associated with performing arts venues. Most or all of the seats are placed higher than the seats in front of them.

“We’re going to get the best possible, sturdy, extremely comfortable and attractive seats that we can,” Hayden said.

“So, we know and the world knows that we need new seats and we’re real excited that we’re going to have them,” Hayden said.

Hayden is “still shopping for new seats” and thinks Island Cinema is “going to end up with exactly 100 in each theater.”

Hayden began applying for “Sand Dollars for Success,” a grant program for startups and existing businesses on South Padre Island, back in January.

The grant program “provides much-needed capital funds to increase sales and create or retain jobs that will improve the economy on the island.”

Businesses that applied for the grant took three courses given by the University of Texas Rio Grande Valley Small Business Development Center. These courses helped the applicants write their business plans.

The Economic Development Board grades every business plan and the ones that score 80 or above qualify for the next and final round. Eight out of the 11 businesses that applied for the grant scored well enough to move on and give an oral presentation to the EDC board.

“Since this is the only movie theater in our whole area, we want to make sure that people aren’t leaving and going elsewhere to just see the movies because of the seating and that’s the kind of feedback she was getting.

“She said she’d get people calling and asking, ‘Do you have new seats yet,’” Lapeyre added.

Hayden emphasized her gratitude to the Economic Development Corporation board.

“I am very grateful to them for having instituted the program and deciding that I was the one who should receive the money this year,” Hayden said. “I’m just thrilled to be moving forward with our seating project.”

This is the second year that South Padre Island’s Economic Development Corporation has offered “Sand Dollars for Success” and is going to do it again next year.

“We already did our budget for next year and we put $25,000 in. So next January, businesses can apply again and if you didn’t get it you can apply again,” Lapeyre said.

“We did have some really good other applicants. Hopefully, some of those will come back and apply,” Lapeyre added.