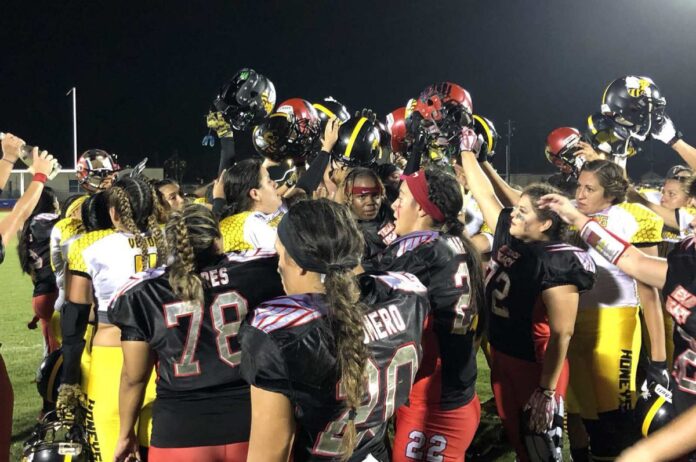 Their opponents, the Texas Legacy, however, had other ideas.

The Legacy’s defense imposed their will, and forced three first-quarter turnovers and used a safety to jump out to an early 22-0 lead. They wouldn’t look back from there as they cruised past the Honeys 65-6 to hoist their fifth championship.

“From where we started to now, we’re proud of the girls and their efforts,” Garcia said.

From the word go, the Legacy’s defense made its presence know by forcing four turnovers along with a safety and shut down the Honeys running game.

“We gave it our best shot,” said Honeys running back Adri Rodriguez. “It wasn’t the result we wanted, but we came together and made it here to the championship game. Making it here means everything to us. Playing this game gives us energy not only on the field but in life. It helps us think positive and it gave us something to look forward too.”

FINAL BUZZ: All good things must come to an end.

With more than half of the current Honeys planning to hang up their cleats along with the coaching staff, it’s possible the team may not exist come next season.

Rodriguez, who is a five-year veteran, is one of the household names on the squad, but will now put her football career behind her and focus on her teaching career.

“It was a great five years; relationships were built and I love my girls,” Rodriguez said. “It’s time to get back to a normal lifestyle and doing every day things. The summer is over, so I’ll get back to teaching soon.

“I’m so thankful for this game and to be given a chance to lead women, and to show that we can do anything. As for me, I never like to say ‘I.’ I can’t do anything with out my blockers or quarterback; it’s a total team effort.”

Meanwhile, Garcia, who is in his second year as the Honeys coach, also plans on retiring.

“You miss out on family time, relationships; it’s tough to be away from all those things, so it’s just time to hang it up. We had a great run and we enjoyed it,” he said.