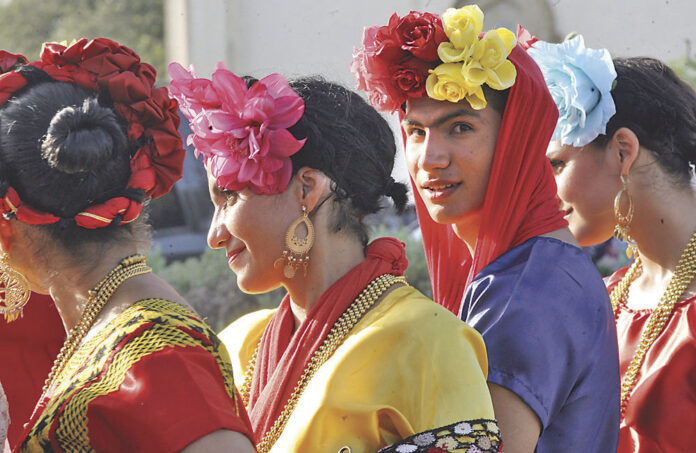 EDINBURG — Feminism and empowerment were the two keywords throughout the evening at the 5th Annual Frida Fest honoring the legendary Mexican artist Frida Kahlo.

Saturday, the city of Edinburg lit up the city hall courtyard as over 275 Frida Kahlo look-alikes occupied the outdoor space dressed in colorful attire, some wearing floral dresses with others sporting a white blouse with a bright colored skirt from red to yellow to green. Braided hair, floral crowns in bright colors and of course unibrows completed many of the looks.

Judith Vega, a Harlingen resident, said she loves celebrating the arts, with this being her fourth Frida event. She was with her sister Sandra and son Jared and his girlfriend, who were all first-time attendees who came out in Frida attire.

“I spent two days sewing their outfits; one night I did the skirts, the next night I did the shirts and we all got together and they chose their own flowers,” Vega said about the process of making the outfits.

Jared said he dressed as Frida to please his girlfriend.

Vega wore a red and black-lace dress that was an original from Oaxaca, Mexico, and based her companion’s outfits on her dress through tracing and using patterns.

Another Frida fanatic was Nicole Diaz, who has been living in Connecticut for two years but is a native of Edinburg. She wore sunflowers as a headband and had a black blouse that read Tacos and Tamales in white lettering and coordinated the blouse with a green beaded skirt.

“It’s amazing, like the collection of vendors, the energy behind it and to have people of all different ages and all over the Valley coming is amazing,” Diaz said about being a first-time attendee.

Diaz added that Kahlo was the first feminist and gave women the right to do anything and called her “the original reina del sur” (queen of the south).

Kahlo, well known for her unique style and unibrow, was a famous artist of the 20th century who has become popular in recent years as a feminist icon. She is also known for her several self-portraits that illustrated the suffering she experienced throughout her short lifetime, from having polio when she was a child to debilitating injuries from a bus crash when she was 18 years of age.

When Kahlo began her painting career, she married artist Diego Rivera, but the relationship was unstable, which led to divorce, but they still remarried years later. She also continued to have health problems, which led to her death, shortly after her 47th birthday.

The annual event also included a Frida procession down McIntyre Street with participants being judged on the required guidelines of a unibrow, flowers on the hair braid, and a shawl with other unique items.

In the city auditorium, a women’s empowerment panel was also held that brought together strong women from the community to inspire the new generations of young women and girls, as well as, celebrate female strength and accomplishment.

The hourlong discussion covered topics such as working together with the opposite sex, having a taste of confidence, being respectful and compassionate and achieving equal success as men.