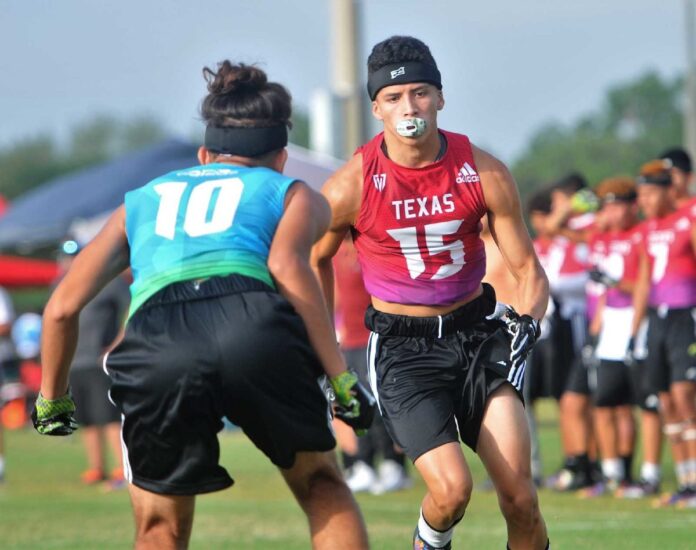 COLLEGE STATION — The Mercedes Tigers have made some noise at the state 7on7 tournament in the past, reaching the consolation semifinals the last two years. This summer, however, was a different story.

In pool play on Friday, the Tigers went 0-3 and found themselves lined up against Parkland on Saturday morning in the Division I consolation bracket.

The Tigers battled back and forth in what quickly became a shootout with Parkland taking a 19-13 lead at the half.

In the second half, the Tigers managed to tie the game at 19 thanks to wide receiver Josiah Cantu, who reeled in a pair of scores from quarterback Isreal Alegria in the contest.

Parkland, however, got the go-head score and then got a key stop late to come away with a 32-26 win and end Mercedes’ tournament.

“It was a great experience. There is a lot of competition and a lot of speed,” said Mercedes’ Sebastian Arteaga. “Playing against tough teams helps us with different things like our foot work and gives us a chance to use and work on our speed.”

While the Tigers didn’t go on their annual deep run, their sights are now set on August.

Isreal Alegria will direct the offense and will have veteran wide outs Sammy Galindo and Leeroy Garcia. Defensively, Mercedes will look to linebacker Juan Morales and Arteaga, who will play in the secondary.

It’s all in the family: The Adame family is no stranger to football. Roger Adame Jr. is the head football coach at Mercedes while one of his sons, Roger Adame III, just graduated. And now Brandon Adame is an incoming freshman and made his 7on7 debut this weekend.

“It’s crazy because I was just in his shoes last year,” said Roger III. “It’s great to see him play and compete here in College Station so he can see what it is like to play at a high level.”

As for Brandon, he grew up around the sport and was once the ball boy for the 7on7 squad, watching his older brother play for the Tigers.

“It was fun being out here and actually playing for the first time,” Brandon said. “It is a great feeling to make it to state after watching my brother play over the last few years. He is always giving me advice and helping me get better each day.”

Brandon also plays defense and lines up at linebacker just like his older brother. Roger III who will be attending the University of the Incarnate Word in the fall is scheduled to leave for San Antonio next week, making it extra special for him to see his younger brother play before he leaves for college.

“It was emotional for me to see him play,” said Roger III. “It will be a while until I get to see him play again. Over the summer, I’ve tried my best to instill as much as I can before I leave.”

Another set of brothers on the team are Raul and Sebastian Arteaga, and Sonny and Ivan Vela.

Both Raul and Ivan graduated with Roger III this past summer and were both cornerbacks. Sonny is slated to play running back for the Tigers this fall while Sebastian will play defensive back like his older sibling.

Raul was in attendance to watch his brother on Friday and Ivan offered a helping hand on the 7on7 coaching staff.