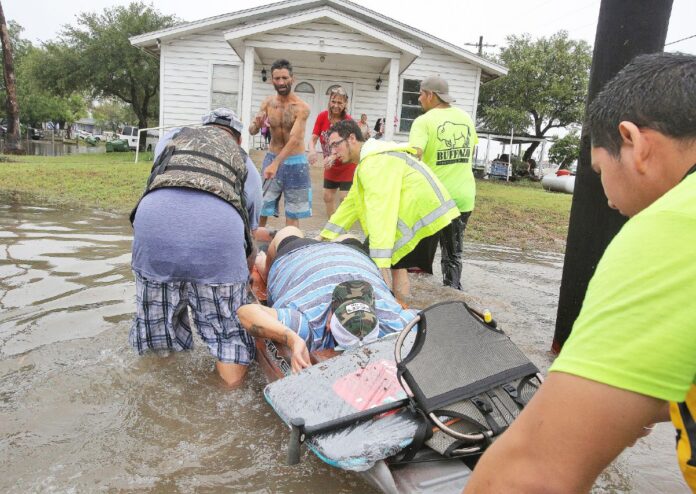 WESLACO — Yesterday morning’s thunderstorms unexpectedly unloaded a torrential downpour that left parts of the Rio Grande Valley, especially here and in the Mercedes area, decimated by flooding rivaling that of Hurricane Beulah in some spots.

Cars lined the highway and frontage roads in the late morning, stretching from the U.S. 281 interchange in McAllen to the Mid-Valley. Some cars along that route were stranded as water reached above the hoods in a few cases.

Motorists had pulled over and waited for help, as driving through Weslaco was not unlike navigating through a watery labyrinth, with city streets becoming near unrecognizable due to being inundated in several feet of floodwater.

First responders from multiple agencies — McAllen, Mission and Weslaco being among them, including Hidalgo County crews and the Texas Department of Public Safety — worked to rescue those stranded in their homes or vehicles as a result of the flooding.

Citizens were seen wading through the flood dragging boats to help others, while some lifted belongings above their heads as they trekked through chest-deep rainwater. These were just some of the scenes Wednesday as rescue attempts performed by local emergency management officials and civilians continued in the Mid-Valley as of press time.

Such was the demand for help that residents on Wednesday signed onto social media to request assistance due to 911 operators being overwhelmed with calls, according to Weslaco police.

“As far as the 9-1-1 system is concerned, if they’re not picking up it’s due to backlog because we’re getting flooded with calls,” Eric Hernandez, public information officer for the Weslaco Police Department, said Wednesday morning. “So we’re trying to monitor 9-1-1 as well as social media, because people are posting on social media that they need rescuing, and I’m relaying that information to officers as well.”

KRGV-TV chief meteorologist Tim Smith reported more than 11 inches of water, the most he’s seen in a single day during his 37-year career, he said.

Hidalgo County Judge Ramon Garcia issued a proclamation declaring a local state of disaster due to damages from recent storms.

As government resources were taxed, citizens stepped up to help fill the gaps.

Parked along an on-ramp before the Airport Drive exit in Weslaco, a group frantically inflated a raft they’d just purchased to help a friend stranded in waist-deep water.

“Once we started filling up the raft, Texas DPS let us know there were some elderly people in need,” said Jazmine Bonham, 25, as her husband and brothers-in-law drudged through the submerged street. “Who wouldn’t help them?

“Your one goal is to get people out safe.”

A DPS helicopter made a low approach over the highway down San Joaquin Street, sending ripples through the water. They made a visual assessment of the area to coordinate resources as residents were still calling 911 for help.

The small church on Expressway 83 and San Joaquin, Templo Betania, served as an informal staging ground where citizens dropped off those pulled from the water, as DPS coordinated with a volunteer force of rescuers.

Roxanne Arevalo, secretary with the church and granddaughter of the pastor, said they also purchased an inflatable boat to help those stuck in their homes.

“I think it’s important because us as God’s children, we’re supposed to help others in need,” she said. “With all the separation going on in the world right now, and in a time of crisis, we’re able to come together as a community and one big family and help each other out … no matter what race, religion or anything like that.”

Rica Martinez, 26, lives a few streets from the church. She stayed behind from her husband and 5-year-old daughter because a group didn’t want to take her pets. Mid-interview, another truck offered to take her, the family’s two 3-month-old puppies and cat.

Her animals fussed as their cages moved into the bed of a truck.

“I’m very blessed that somebody finally came to help us, because we’d been underwater since about 6 a.m.,” she said before leaving on a stranger’s truck.

Citizens in many cases didn’t have much time to react.

Gilbert Benavidez, 39, lives off 11th Street south of Business 83 in Weslaco. He realized the extent of the water when he stepped off his bed, into a pool of water.

It rose more than half a foot in the next couple of hours. By the time they evacuated, their vehicle was underwater “floating all over the street.”

As he stood next to the waterline a few blocks from his home, he commented on how little the water had receded. He attributed this to clogged drains in the neighborhood.

Emergency personnel were also affected by the rain, according to Weslaco Utilities Director Pete Garcia Jr., who said even the city’s warehouse, where equipment and vehicles are housed, was inaccessible due to flooding.