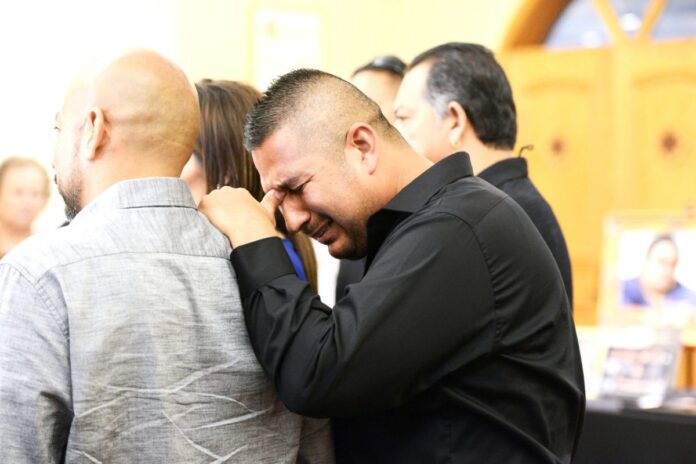 BROWNSVILLE — There are some sweet sounds coming down from heaven.

“There’s quite a band up there right now,” said Tommy Gonzalez, brother to the late Tejano legend Jimmy Gonzalez, 67, a Brownsville native, who died last week in San Antonio.

He died of cardiac arrest after becoming ill with low blood sugar issues following a concert and was transported to Methodist Hospital in San Antonio where he passed away.

On Monday, at the Brownsville Events Center, friends and family of the late Tejano artist gathered to celebrate the life of their loved one as fans filtered in and out to pay their respects.

But Jimmy’s legacy is not lost on his family or on his friends and family all across the country.

“His whole life he succeeded,” Tommy said. “That’s what he set out to accomplish.”

However, in the days leading up to Jimmy’s death, Tommy said it was evident his brother’s health was deteriorating.

“I saw that during these last few days his health was not going up and I said, ‘Brother, you got to maybe stop, and he said ‘If I stop, this is what fuels me, this is what gives me life. If you take me away from the stage, I’m dead,’” Tommy said, recalling the conversation.

While Jimmy was not in his native Brownsville for the end of his life, Tommy said he did die in a city beloved by the musician.

“Jimmy loved San Antonio. San Antonio was kind of like his home away from home. The warm reception that San Antonio gave Jimmy was loved by him. It was special,” Tommy said. “And he knew when things got tough, he could go to San Antonio and find comfort in his fans, in his surroundings, just everything about that city. So we’re very grateful.”

And his family said Jimmy’s memory will be cherished and kept alive.

The late musician’s brother also said Jimmy was proud to represent Brownsville while out on tour.

“It means a lot, like I said, he was very proud to represent Brownsville wherever he went and he had a good time and everybody here, growing up here, it’s uh, it’s part of the Brownsville history now and I’m glad and proud to say that many people supported him tremendously and we say thank you,” Tommy said.

But the outpouring of the support for the family has come from across the country, not just South Texas.

“And there’s people reaching out to us from everywhere: Florida, Chicago, New York, I mean, it’s tremendous,” Tommy said. “And so he succeeded, mission accomplished.”

That music will live on forever and will continue to be enjoyed by new generations of fans.

“There’s going to be some sweet sounds coming down from the night shift. There’s quite a band up there right now,” Tommy said. “And our mom is giving him direction, our mom really bred the music in all of us and so I can only imagine the music they are making up there.”

The funeral Mass is scheduled for 10 a.m. on Tuesday at St. Mary’s Catholic Church in Brownsville. The late Tejano superstar will then be laid to rest in Buena Vista Burial Park.