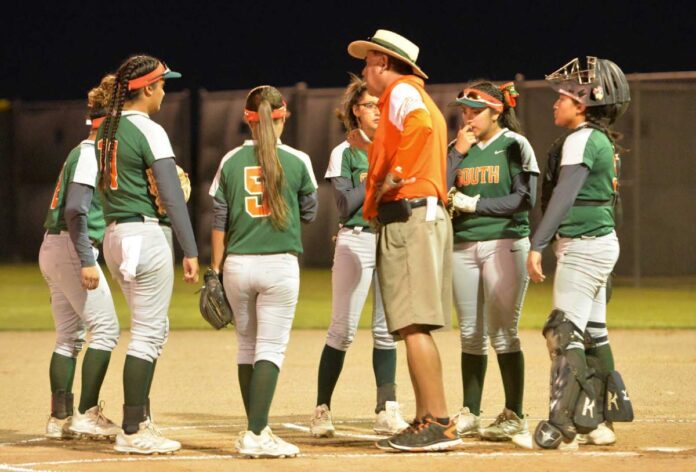 HARLINGEN — Edinburg Vela used a three-run third inning behind a home run by Gabriella Villarreal and a two-run single from Darissa Buenrostro in a 5-3 win over Harlingen South in a one-game Class 6A regional quarterfinal on Friday at Lady Hawk Field.

“I’m proud of the girls and what they did all year long,” said South coach Elias Martinez. “Every year you go through the good times and you go through the bad times; tonight we were down and we battled back like we always have. We made some errors that hurt us, and she (Vela’s Naomi) Reyes can pitch very well. She did a great job for Vela tonight.”

Reyes allowed just two hits through her first four innings of work and kept the Lady Hawks at bay.

In the fourth and fifth innings, Reyes ran into some trouble as South managed to get two runners on base, but couldn’t capitalize.

In the fifth, South broke through and scored three runs cutting into the lead at 4-3.

South’s Natasha Canales drove in the first two runs on a double. Kaitlynn De La Fuente followed with an RBI double of her own, but that was a close as the Lady Hawks got. Vela later added an insurance run in the sixth extending its lead back to two runs.

Despite the loss, South will only bid farewell to three seniors in De La Fuente, Caitlyn Hejl and Daisy Gallegos.

The Lady Hawks will have plenty of key pieces returning next year led by shortstop Krystal Gonzales, Melba Rodriguez and Kytana Muniz.

“Coach Martinez has meant so much to me as a player and as person,” Hejl said. “I have become a better person because of him. This program is great. We went from losing in the first round to making deep playoff runs and that is special. I want the younger girls to continue that tradition and to remember the feeling of losing, and taking off your cleats for the last time as a senior. It hurts, but I hope to see them continue the tradition.”