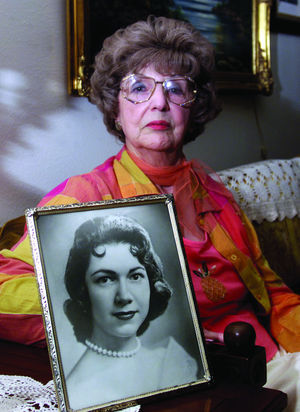 EDINBURG — Jurors heard testimony in the John Feit murder trial yesterday that accused the ex-priest of threatening two other local women before beating, raping and suffocating a young schoolteacher on Holy Saturday in 1960.

Feit, 85, who left the priesthood in the 1970s, is accused of killing Irene Garza. The former Miss South Texas had attended evening confession at McAllen’s Sacred Heart Catholic Church on April 16, 1960, but never returned home.

Her body was found in a canal five days later. She was 25 at the time of her death.

Ana Maria Cavazos Hollingsworth, 83, testified that Garza seemed conflicted by the priest’s unusual behavior. Garza was an old friend of Hollingsworth, who told jurors that the victim visited days before her disappearance and shared hesitations about a new priest who considered himself to be “handsome.”

Garza confided in Hollingsworth that, on at least one occasion, Feit took her to the rectory for confession, reasoning that the confessional wasn’t “good enough for you,” she testified.

Hollingsworth noted she wished she had asked Garza what she meant by that, lamenting, “We lost her in a very sad and morbid and sorrowful way, and no person should have been treated like dirt, to be thrown in a canal.”

Earlier in the day, Beatrice Garcia, 77, and Cleotilde “Tilly” Sanchez, 80, told jurors about their own run-ins with Feit.

Garcia said he drove past her in downtown McAllen and remarked, “I would love to take a picture of you dressed in black in the cemetery.” She ignored the comment at the time, thinking the then-young priest was “just trying to scare” her.

Sanchez worked as a cook in the rectory of Edinburg’s Sacred Heart Catholic Church and testified that, as she was walking to the basement, she heard Feit joke to the other priests, “How about if we close the door and make Tilly disappear?”

After Feit allegedly attacked a young woman, America Guerra, in the same church where Sanchez worked, Sanchez testified that she received a threatening phone call from an unidentified caller who told her, “Tilly, you’re next, honey.”

Sanchez testified that she immediately recognized the voice on the other line as Feit’s and reported the call to another priest. Although the priest she told called McAllen police to report the threat, when Sanchez was interviewed by officers, church officials dissuaded her from lodging a complaint against Feit.

In his opening statement Thursday, the prosecution called Sanchez, Garcia and Guerra “the lucky ones (who) survived” a man “with a depraved heart bent on mischief.”

Flores, in his cross examinations of Hollingsworth and Garcia, questioned why they had never gone to authorities with their concerns about his client in the wake of Garza’s disappearance.

Hollingsworth testified that she contacted the Hidalgo County District Attorney’s Office with her story just two weeks ago, after the victim’s godsister — who took the witness stand Thursday — convinced her to meet with the lead prosecutor.

The delay in contacting law enforcement also marked the testimony of the day’s final witness, a man the prosecution flew in from Oregon to tell jurors that he observed Feit, a Pan American College classmate in 1960, with scratches on his hand resembling fingernails. These scratches were seen in the wake of Garza’s death.

Jose Garcia, 87, testified that he didn’t report this to police because he had read a newspaper article stating that police had questioned a priest about her death and assumed there was no reason to question their investigation.

Garcia came forward with his story in 2000, after reading a Brownsville Herald article about the cold case.

Earlier in the day, Garza’s clothing worn on Holy Saturday — including a skirt, slip and petticoat — was entered into evidence, along with the shoe and purse friends discovered days after her disappearance. Feit’s viewfinder, which was found near Garza’s body, was also entered.

Feit claimed ownership of the viewfinder in a note given to McAllen police on April 29, 1960. A Texas Department of Public Safety forensic document examiner testified about the note, believing it to have been written by Feit.

Flores, however, has argued that forensic evidence linking Feit to Garza’s murder is lacking.

Testimony resumes Monday as the state calls more witnesses to the stand.